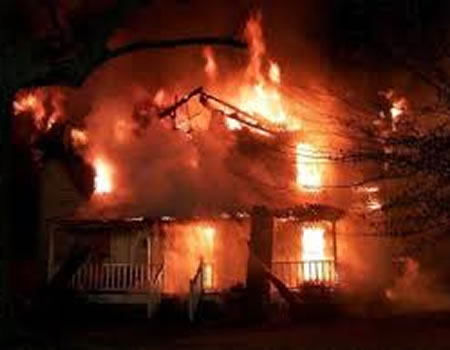 Tragedy struck in Oyo State in the early hours of Sunday as a 26-year-old man, identified as Monday Daniel, set the house of his family members at Budo Alaka village, Kisi, in Oriire Local Government Area  of the state on fire, killing five of its occupants with two others badly burnt.

The casualties of the fire incident were reported to be asleep when he, the suspect, carried out the act.

While the dead five victims were burnt to ashes, the two survivors, Samuel Daniel Ode (24) and Mariam Samuel Ode (21), were said to be receiving treatment at Muslim Hospital, Kisi.

According to an eyewitness account, the suspect had on the previous day approached a member of the family for some money to travel to an undisclosed destination but the request was turned down. Angered by this, the suspect allegedly few hours after, when the family members were asleep, set the thatch-roof house on fire.

Metro gathered that the suspect initially escaped from the scene but was later apprehended by the police.

Confirming this to Metro, the Police Public Relations Officer, Adekunle Ajisebutu, a Superintendent of Police, said that the Daniel confessed to the crime but claimed he did not know what came over him.

He added that the case would be transferred to the Criminal Investigation and Intelligence Department (CIID), Iyaganku, Ibadan, for further investigation.

Businessman in court for allegedly setting wife’s property on fire