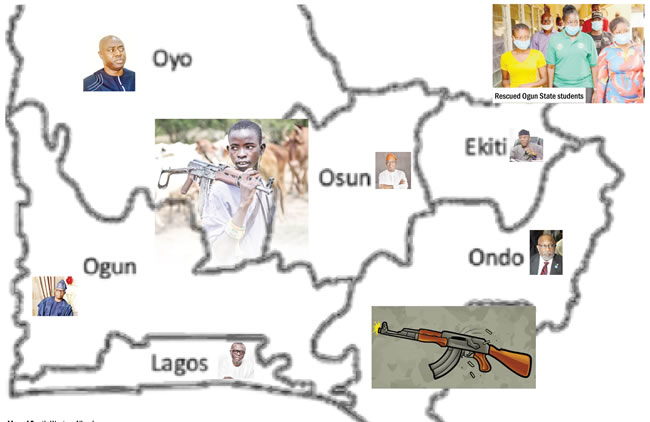 As most roads in the SouthWest, particularly roads considered as arterials that link states and major cities become increasingly dangerous owing to activities of armed bandits, Sunday Tribune investigations have identified 49 dangerous spots across the region where these criminals operate.

Information gathered from security sources and victims has usually blamed herdsmen for most of the abduction cases on South-West roads. These criminals, according to investigations, use the hotspots to launch their attacks and then sweep their victims into the surrounding forest.

For instance, on the Lagos-Ibadan highway, security sources, as well as drivers of commercial vehicles, listed Ogunmakin/Alapako, Saapade and Kara Long Bridge areas as perhaps the most dangerous of the spots the criminals operate from.

“Their operation times are usually before dawn when visibility is poor and at night.

“Commuters on that road should be very careful as it is dangerous to travel at those times,” the security source explained, confirming expert advice from an elder statesman who had warned about the activities of criminals on that highway.

There are other spots that litter the roads and communities in the South-West, according to Sunday Tribune investigations. In Ekiti, Ondo, Oyo, Ogun to Osun and Lagos, these roads have become nightmares to commuters and residents of communities adjoining them.  Read the full report here: Behold South-West Kidnapping Spots …Why Roads Users, Others Must Beware

Akinade urges women to keep their husbands and children in prayers