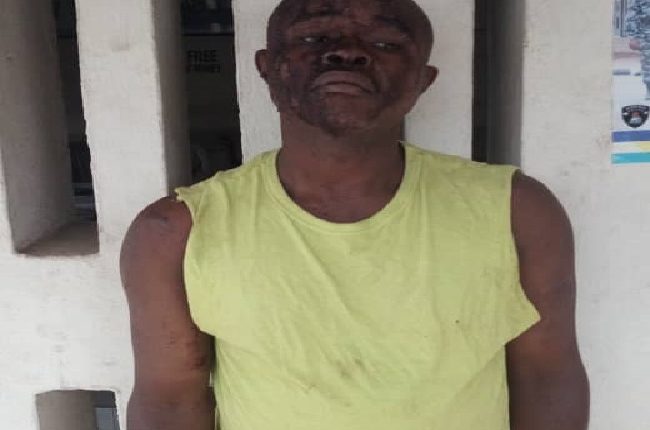 Police in Anambra State, have arrested a 47-year-old man, Mr Emeka Ezimadu, for allegedly killing two of his own children, his 85-year-old mother, injured three other children at Okpuneze Uruagu in Nnewi North local government area of State.

The state Police spokesperson, SP Haruna Mohammed, who disclosed the act in a statement, said the suspect allegedly ran amok in a circumstances yet to be ascertained, attacked and killed two of his biological children namely Ifechukwu Ezimadu ‘m’ aged 9 years,Mmeso Ezimadu ‘f’ aged 2years and his own mother one Agnes Ezimadu ‘f’ aged 85years of same address allegedly with a cutlass while they were sleeping.

It was Police operatives attached to Nnewi Division that arrested the suspect on 17/9/2020 at about 11:55 pm.

“Meanwhile, police detectives visited the Scene and rushed victims to the Akwudo hospital for medical attention where the two children and the aged mother were certified dead by a medical doctor while the three other children are receiving treatment, Mohammed added.

THE Minister of state in the Federal Ministry of environment Mrs. Sharon Ikeazor has commended the National Biosafety Management Agency (NBMA) for its efforts in ensuring that the activities of modern Biotechnology and its products are properly regulated.
https://tribuneonlineng.com/minister-commends-nbma-on-regulations-for-gmos/ children, Mr Emeka Ezimadu

The Federal Government has reiterated its commitment to the protection of schools and learning centres across the country from violence and all forms of attacks. children, Mr Emeka Ezimadu