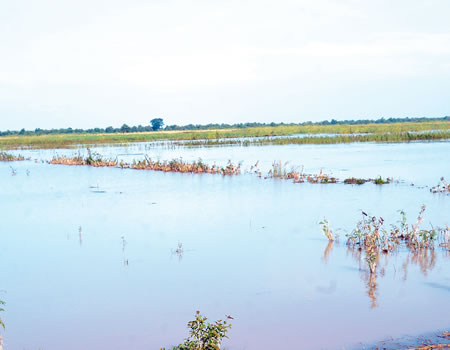 FOUR hundred and fifty-eight hectares of farmland under the Central Bank of Nigeria (CBN) Anchor Borrowers Scheme have been submerged by water in Kwara State.
The farms are situated around 3, 200 hectares Federal Government’s Tada – Shonga Irrigation Field for Rice Cultivation in Shonga, Edu Local Government area of the state.
The Irrigation Field is along the River Niger bank, which its flood embankment project (dyke) is under construction.

Speaking with journalists, some of the affected farmers lamented that the rice was due for harvest in October before the unfortunate incident.
They called on the Federal Government to provide tube wears on every hectare and support them in mitigating the effects of the flood.

Governor Abdulfatah Ahmed of Kwara state, who led a federal lawm entative of the Minister of Agriculture and Rural Development, Dr Elijah Aderibigbe and the Managing Director, Lower Niger River Basin Development Authority, Mr. Adeniyi Aremu to the flooded farms, called on the Federal Government to come to the aid of the state in ameliorating the sufferings of the farmers.

Governor Ahmed, who was represented by the Chief of Staff, Government House, Alhaji Yusuf Abdulwahab, said that the natural occurrence had hampered the state’s quest to showcase its efforts in massive rice production and appealed to the Federal Government to expedite action on dyke construction.
He noted that the fund for the rice cultivation was sought from the Central Bank of Nigeria (CBN) to support agric-business in the state.

Governor Ahmed said that the flooded rice farms were part of the state’s major flagship agricultural scheme with huge value addition.
Also speaking, the Chairman, House of Representatives Committee on Water Resources, Alhaji Aliyu Ahman-Patigi, expressed concern over the loss and advised the Ministry of Agriculture and Rural Development to immediately come up with plans to mitigate the effect of the flood on the farmers.

Alhaji Ahman-Patigi, who represents Edu, Patigi and Moro Federal Constituency of Kwara State, disclosed that the sum of N720 million was budgeted in the 2017 budget for the construction of dyke, pumping station and access road around the area.

The lawmaker explained that construction of dyke would permanently secure the rice farms against flooding in the future.
Speaking in an interview, the representative of the Minister of Agriculture and Rural Development, Doctor Elijah Aderibigbe, announced that the first phase of the dyke construction would be completed by April, 2019.
Dr Aderibigbe, who is the Acting Director of Irrigation and Drainage in the ministry, said that the Federal Government was interested in the farms and would do everything possible to get the flood protection project completed.

Earlier, the State Commissioner for Agriculture and Natural Resources, Mr Goke Bamidele, had said that the representatives of the CBN had visited the farms and assured the affected farmers that all parties concerned would soon come up with action plan towards assisting the farmers.