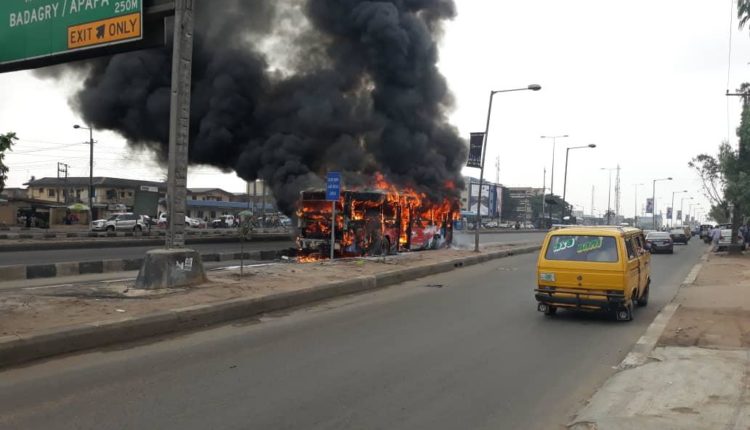 No fewer than 45  passengers escaped death on Monday morning in Lagos a BRT bus conveying about 45 passengers caught fire near Anthony Bus Stop on  Ikorodu Road.

As of the time of this report, it was gathered that no life was lost, but some passengers sustained injuries while trying to escape from the burning bus.

It was learnt that the  BRT bus, from Ikorodu Terminal en route the TBS Terminal on Lagos Island, suddenly caught fire at Idiroko Bus Stop near Anthony.

Spokesperson of the  National Emergency Management Agency (NEMA),  Mr Ibrahim Farinloye, who confirmed the incident,  said that the bus was conveying 45 passengers when the fire incident occurred.

According to him, All passengers were rescued unhurt, adding that the incident occurred at about 11 am.

“NEMA, Police Disaster Management Unit and fire service rescued the passengers unhurt. There was a rescue bus to assist in evacuating stranded passengers from a broken-down bus.

“The initial bus carrying the passengers took off from Ikorodu but broke down at Owode which made the burnt bus to come to the aid of the passengers,”  the spokesperson of NEMA said.

The Federal Government is owing the university workers, under the National Association of Academic Technologists (NAAT), the Senior Staff Association of Nigerian Universities (SSANU) and the Non-Academic Union of Universities and Associated Institutions (NASU), over N150 billion earned allowances…45 passengers escape death as BRT bus catches fire in Lagos