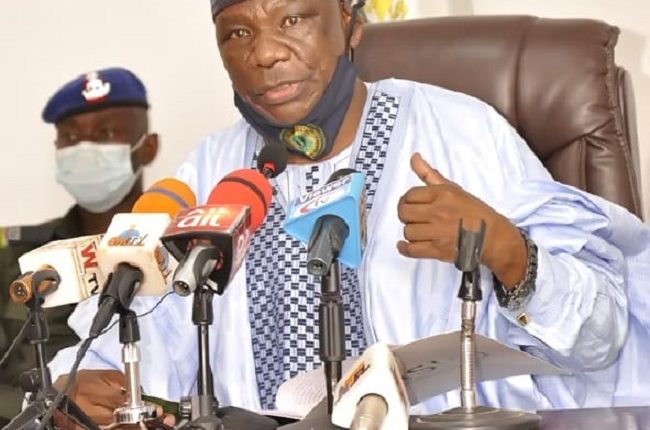 One year after the outbreak of the novel COVID-19 pandemic and the record of the first index case in Gombe State, the State Government has declared that as of today, a total of 44 people died of the infection just as it said that the battle against the virus in the state in the last one year has been a success story.

The declaration was made by the State Deputy Governor, Dr Manassah Daniel Jatau, who is also the Chairman, State Coordinating Committee on COVID-19 during a media briefing where he added that 44 lives were however lost during the pandemic period.

The State Task Force on COVID-19 which was inaugurated by Governor, Muhammadu Inuwa Yahaya, swing into action even before the first index case of the virus emerged in the state exactly one year ago.

According to the Deputy Governor, since the detection of the first index case, the Task Force has been coordinating response activities round the clock stressing that the success recorded was a combined effort.

He further said that the efforts to strengthen the surveillance system and response activities in the state are clear testimonies of the governor’s commitment towards safeguarding the health of the people which has been the best goal after security.

He further said that the Molecular Diagnosis Laboratory in the State Specialist Hospital also serves Adamawa and Yobe States revealing that the facility is also being targeted for testing of Lassa Fever, Ebola and other related diseases among many others to mitigate the effect and spread of COVID-19 virus.

Manassah Jatau also said that apart from the distribution of palliatives to indigenes across 114 wards, the government established 18 boarding schools as safe isolation spaces where 112 cases were successfully managed and discharged.

Another area of success according to the Deputy Governor was that of the vaccination campaign where 32,956 people received the first dose of the COVID-19 vaccine saying that the second dose will be available for administration after 8-12 Weeks of the first dose.

The Deputy Governor said that “It is now possible for an individual to receive the second dose of AstraZeneca in any part of the country. The pandemic is ongoing with some parts of the world experiencing a third wave and the emergence of new strains.”

He explained and pointed out that Gombe State and Nigeria shall continue to sustain their testing drive and all other response activities in keeping with national guidelines and global best practices until hard immunity with the vaccination campaign is attained.

“Gombe State shall sustain its infection prevention control measures like the proper use of face marks, frequent handwashing with soap and water, cough etiquette and physical distancing”, he assured.

He, however, advised people with symptoms of respiratory tract infection like fever, cough, and catarrh to visit the nearest health facility.

The Deputy Governor then appreciated the World Health Organisation (WHO) and other international donor organizations, the Federal Government, NCDC and Presidential Task Force on COVID-19, the Governor of Gombe State and the Pioneer Chairman, Task Force on Corona Virus, Gombe State, Security Agencies, Traditional, Religious and Community Leaders for their role in implementing, and compliance to the recommendations of COVID-19.