424 constituents in Bauchi get empowerment items from Senator Jika 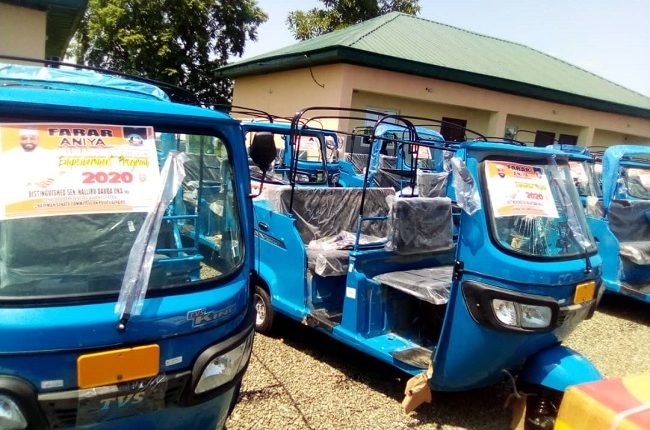 A total of 424 youths and women drawn from the LGAs to make up Bauchi Central Senatorial District have been empowered to be self-reliant by the senator representing the area, Halliru Dauda Jika.

While distributing the items to the beneficiaries on Sunday at Kafin Madaki headquarters of Ganjuwa LGA, the senator explained that the gesture was part of the efforts to fulfil his campaign promises by providing employment opportunities for youths and women in His constituency.

The senator said that the items distributed include,  25 cars; 96 motorcycles, 83 tricycles, 50 power generating sets, 130 sewing machines and 40 water pumps, farms tricycles in addition to N10,000 offered to each of the beneficiaries as take-off grant.

The senator also said that an additional 300 women from six different local governments that made up the constituency have benefitted from the sum of N3 million cash donation as incentives to start various businesses of their choice.

According to the senator, the idea of the distribution was to reduce the rate of unemployment among youths and women as well as encourage the spirit of self-reliance and wealth creation in society.

The senator then called on all the beneficiaries to make good use of the items, adding that many youths and women will continue to benefit from such interventions because according to him, such motivations will reduce the rate of unemployment and over-dependence among youths, hoping that such motivations will also curb insecurity.

In his speech, the state chairman of the All Progressives Congress (APC) Alhaji Uba Nana commended the senator for the gesture saying elected politicians should not abandon their electorates but should emulate Jika through execution of constituency programs and provision of intervention.

Nigeria’s tally of confirmed COVID-19 cases on Saturday rose to 40,532 as 555 new infections were announced by the Nigeria Centre for Disease Control (NCDC)… Read Full Story