40 years ago, I warned that Lake Chad would dry up if… —Oba Adesina 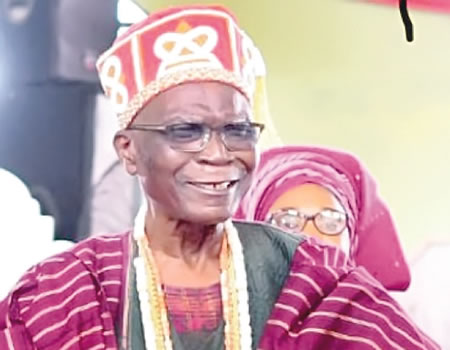 The Olowu of Owu-Ijebu, Oba Michael Olusegun Adesina, Olugbadebo Olukera II, a seasoned engineer,
recently clocked 80. In this interview by WALE OLAPADE, he speaks on his engineering career,
life as a traditional ruler, community development, among other issues.

How long have you been on the throne of your forefathers and how has it been so far?

I have been there for 12 years and a couple of months. Like many things in this country today, it has been quite challenging and most of our people engage in farming in a forest reserve. I have about 50 smaller traditional heads in those forest areas and they have farmers, they employ and give them pieces of land and these farmers come from different states: from Oyo, Lagos, Ondo, Ekiti mainly, but we have a few from other places. And when you have such diversities, you will find that there will always be one issue or the other which their traditional heads try to handle and if they can’t, they come to me in the palace and that is almost a regular thing. You have one or two at least in a day coming like that. So it has been quite stressful, but we thank God, He has always been in control.

What was is like before you became a traditional ruler?

I attended schools in Ijebu Ode for my primary and secondary education. I did ‘A’ levels at Abeokuta Grammar School and my first degree in Zaria, which is now Ahmadu Bello University. We did London University degree as external students. I worked for the Western State government as a Provincial Engineer in Ijebu Ode, which covered Ijebu and Remo areas. When they created the first Water Corporation in Nigeria, in the old Western Region, I moved from Ministry of Works to Water Corporation before I was transferred to Abeokuta as the Area Manager. The area covered at that time was the whole of Ogun State now. It included Yewa, Egba, Ijebu and Remo. And then we constructed most of the water schemes including elevated tanks and so on.

When I was in works, we constructed most of the roads, all by direct labour. I felt the civil service could not make me achieve my dreams in life, so I left after nine years. I established my own consulting firm with some friends. One of them has gone to be with the Lord; Adedeji is still in Lagos, but he has left the firm. And we are lucky we had series of jobs as consultants for both the federal and state governments, universities as well and also for the World Bank, UNICEF and so on. We did consultancy for them but within Nigeria and that covered the whole country.

At the time you were called to come and serve your people as traditional ruler, how did you embrace it?

Actually, I was invited to come and be the Olowu of Owu-Ijebu because I was very busy as an engineer and my consulting firm was having two shifts; I had to coordinate with some of my partners. I felt that at the end of the day you needed to serve your people, so I saw it as a personal sacrifice to come back home and serve. But I was really, really very busy as consultant, in fact I was representing the Federal Government, for instance in some forums which they now call climate change and so on. We had world conference in Canada; I was asked to go and present a paper by the Federal Government in the late 90s. I have served also as chairman of water and sanitation committee of national Council of Water Resources. I was also active in the industry, in the business world because when they setup Ecobank, it was sponsored by Lawson Adeyemi of blessed memory. I was one of the first 23 shareholders of Ecobank. Ecobank has shareholders in 39 countries in Africa.

What would you say has been your achievements after 12 years on the throne?

Well, what we have tried to do which is still ongoing, is with the farmers; we are trying to see how we can go from the cutlass and hoe method to mechanised farming. And then we are trying to make sure that we don’t just farm and people come and take the raw materials, take them somewhere else to process and so on, we are trying to see what we can do to make the crops put work not just to the farmers but to the technicians, the industries and other value chains in the industry.

What would you say is your most memorable moment so far on the throne?

It is difficult to assess that but things done when I came on the throne, some of them I started even as a young engineer; town hall, then our church. We, the consultants, partly funded it; the central mosque, I was part of that too. And each time I have an occasion, I give scholarships and those scholarships will take the beneficiaries from secondary to university till they finish.

Do you have a count of how many people you have given such scholarship to?

I can’t give the exact number because even while practising as an engineer I had been doing that, but it can’t be less than between 50 and 100. But you must show that you have the capacity and that your parents are unable to pay. Those are the conditions. And they have been doing well including the SOS children village here, we give scholarships to them and I am happy doing that.

In terms of promoting culture and  festivals in this part of the world, how effective has it been since you came on the throne?

I want to promote culture and I have been doing that but I want to promote culture without sacrificing people’s religion and belief. That is very important to me and in some instances it became a real challenge because when they want to, I tell them no, and if they still want to do that I ask what does it cost and I give them money to go and do what they want to do. But the real culture, the music, the dancing, I have been taking active part in those, but not sacrificing or asking people to sacrifice their religion, no. I don’t take part in that. It could be challenging occasionally, but I insist.

What do you miss most moving to royalty?

I miss my profession, although they still call me. Now, Lake Chad is drying up and they are trying to re-water it and the minister called me and said I have to be part of this. This was only last year. We had to go to Abuja, 12 of us: eight were professors and the rest of us were professional people. Because I remember about 40 years ago I told them that Lake Chad would dry up if things were not done and today that is coming to fruition.

For instance, for every river going across from one country to the other, there is an international obligation that a minimum 25 per cent of the water passing those countries that water the lake must be allowed to go. You can’t just dam it and deprive the next community of water. That was not done and Lake Chad started drying up because the waters feeding it has been truncated on their way to the lake. We are now suggesting that, during our last meeting, water should be pumped from one of the sources: Congo, which is more than 2,000 kilometers into Lake Chad. And it is passing through many countries; you have to be in agreement with those countries because your pipe is passing through those countries. And it is a lot of funding and then just as we have pipeline vandalism in Nigeria, you could also have things like that.  There is hardly any other route to Lake Chad because you can’t take water from Nigerian ports; the water is salty, you can’t use it. The one coming from middle Africa is pure water and is being passed into Congo and discharging directly into the sea. Then it passes through Cameroon and Cameroon is making its own demand. But 30 million people are involved in the Lake Chad issue from four countries: Nigeria, Cameroon, Niger Republic and Sudan. 30 million depend on Lake Chad for their farming and so on and it has gone down to about 10 per cent of its original capacity. But when we warned the authorities 40 years ago, it had only lost five per cent. We went there and we said this thing has moved back by five kilometers from its original point. Now it has moved over 50 kilometers and what we have there is less than 10 per cent of the water.

Will this be attributed to climate change or human error?

No. The countries through which the rivers that are feeding Lake Chad are passing, they are diverting the water for their water supply, for irrigation and so on. But international obligation states that you allow certain percentage to pass through and this they are not doing.

What I told Senate on Bayelsa, Kogi governorship elections —Yakubu

Ogiyan, Olowolotu Ife, others are descendants of Olofin —Oba Adeniyi