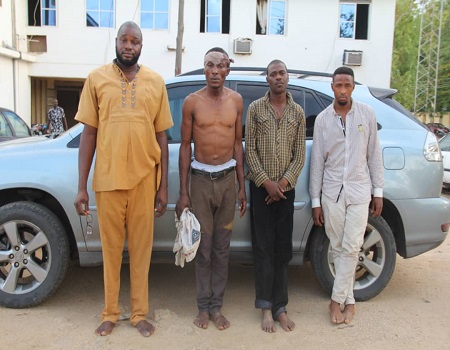 The release further contained that the suspects freely confessed to having robbed the vehicle along with three others on the same date at about 0900hrs from a woman, at Forest, along Abuja – Jos highway.

After a search on the vehicle, the following items were recovered: Infinix phone belonging to the robbed victim, Photocopy of the vehicle invoice bearing one Linda Onyinye Anakwe of No. 51 Rukuba Jos Plateau State, Pair of clothes, Seven Necklaces and other documents.

Kamal Datti Abubakar added that a discreet investigation led to the arrest of two more suspects on 03/06/2019 in Bauchi metropolis namely: Ikenna Okoronkwo 28yrs of Janta Adamu Jos Plataue stats and Solomon Ijika m 32yrs of Federal Lowcost in connection with the crime stating that the case is under investigation after which the suspects will be charged to court.

During the raids, a total number of sixty notorious Sara-Suka thugs were arrested while exhibits recovered from them include: 2 Knives, 11 Machetes and 8 Sachets of assorted illicit drugs.

The PPRO assured that the operations will be sustained to ensure hitch-free Sallah festival while the case is under investigation.

The State Police Command had deployed a total of 3,067 Officers and Men comprising Conventional Police and other Tactical Teams of the Command as well as necessary logistics to all praying grounds and venues of events in the State for the Eid-el Fitri Sallah celebration.

A press statement signed and issued by the PPRO, DSP Kamal Datti Abubakar contained that all the personnel deployed for the critical assignment are under the strict instruction of the Commissioner of Police to be civil but firm in the discharge of their duties.

Furthermore, the Command declared it’s preparedness to deal with hoodlums, political thugs and other disgruntled elements that may attempt to cause break down of law and order before, during and after the festive period.

The Command will also collaborate with Sister Security Agencies and all critical stakeholders to ensure that, the celebration was peaceful and hitch-free.

The CP, Habu Sani Ahmadu then extended his warm greetings to all Muslim faithful and other citizens in the state as they celebrate the 2019 Eid-el Fitri and enjoined them to cooperate with the Police and other security agencies in their efforts towards ensuring a peaceful celebrations and equally report any suspicious person or object to the nearest Police Station or call the Command emergency phone number 08151849417.

The Command also assure the good people of Bauchi State of its readiness to perform its statutory responsibility of protection of lives and property of innocent citizens in the State during the celebration.

Starting on faulty notes: Governors that got it twisted