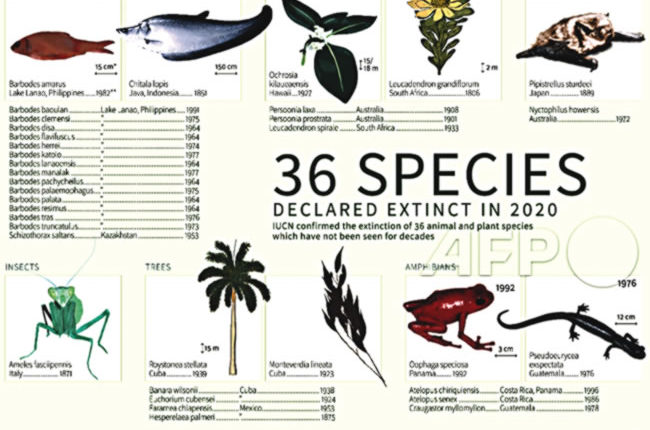 The International Union for Conservation of Nature (IUCN) has confirmed the exctinction of 36 animal and plant species which have not been seen for decades.

An infographic done by AFP shows that one of such plants is the Leucadenron spirale last seen in South Africa in 1933. Another extinct plant is Persoonia laxa, last seen in Australia in 1901. One of the extinct mammals is Pipistrellus sturdeei, a kind of bat, last seen in Japan in 1889.

According to IUCN, “All of the 17 freshwater fish species endemic to Lake Lanao and its outlet in the Philippines are now Extinct (15 species) or Critically Endangered (Possibly Extinct) (two species). The extinctions were caused by predatory introduced species, compounded by overharvesting and destructive fishing methods.

“The species was last recorded in 1934. Its habitat in the South China Sea has been extensively fished for more than a century and remains one of the most overexploited marine regions in the world.

“As it is unlikely that the species could have persisted under this heavy pressure, the lost shark may already be extinct.”

“Additionally, 22 frog species across Central and South America were listed as ‘Critically Endangered (Possibly Extinct)’. The main driver of these drastic declines is chytridiomycosis disease.

The conservation body, however, noted that “Conservation efforts to protect critical habitat are helping populations of several other amphibian species to recover. Among them is the Oaxaca Treefrog (Sarcohyla celata), which moved from ‘Critically Endangered’ to ‘Near Threatened’ thanks to actions by local communities in Mexico.”

“Seeing so many species joining the Extinct category, many of which have only just been discovered, is heart-breaking. The Red List is a vital tool that helps us understand the pressures facing the diversity of life and therefore the conservation responses needed. A healthy natural world is vital to our wellbeing – we now need to see a clear focus placed on the recovery of species and the maintenance of diversity within the new Global Biodiversity Framework,” said Dr Andrew Terry, Director of Conservation and Policy at ZSL.

“As a conservationist, the most emotionally impactful news to present is the confirmation of extinction. The causes range from overexploiting to disease, with some threats easier to mitigate than others. The impact of chytrid fungus on amphibian populations has been particularly vexing, challenging conservationists worldwide. There have been successes and recoveries, as noted in the update, and we need to redouble our efforts to address this and other emerging disease threats to biodiversity,” said Dr Thomas E Lacher of Texas A&M University.