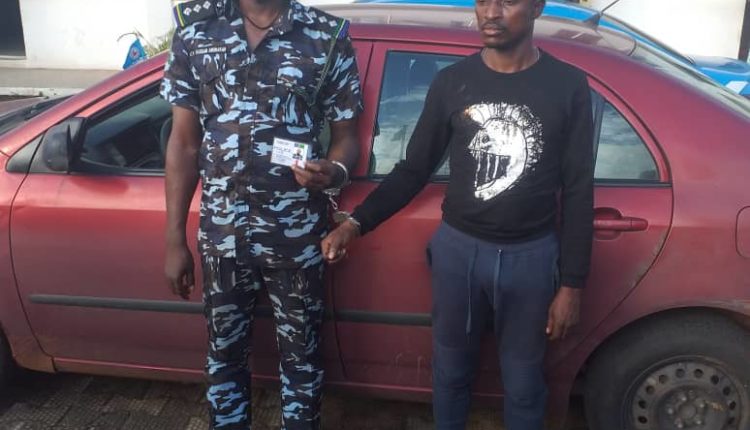 Share
A fake policeman, Mr. Hassan Abuka, has been arrested in Anambra State with a Toyota Corolla car which suspected to have been stolen in Lagos State.
The state Public Relations Officer of Anambra State Police command, Mr. Haruna Mohammed, who disclosed this in a press statement, said the 33-year-old Benue indigene was tracked down to Anambra, using geo-location technological equipment.
The PPRO stated that “At about 4:30 pm, following intelligence report, Police operatives attached to the Command Special Anti Robbery Squad (SARS) arrested at Ihiala, one Hassan Abuka ‘m’ aged 33 years of Otukpo, Benue State fully dressed in Police camouflage uniform bearing a DSP rank and one Ismaila Ahmed ‘m’ aged 37 years also of Otukpo, Benue State.
According to him, “ the suspects, who specialise in impersonating Police to deceive their victims snatched a Toyota Corolla car, Reg number Lagos AGL 357 FC, from a yet to be identified victim in Lagos and were geo-located at their hideout in Anambra State.
“Exhibits recovered in their possession includes the snatched vehicle and additional vehicle plate number Lagos FKJ 701 FR.”
Haruna said the suspects had voluntarily confessed to the crime and are assisting the Police with useful information that could aid investigation after which they would be charged to court for prosecution.