31 arrested over alleged burning of Police station in Iwo community 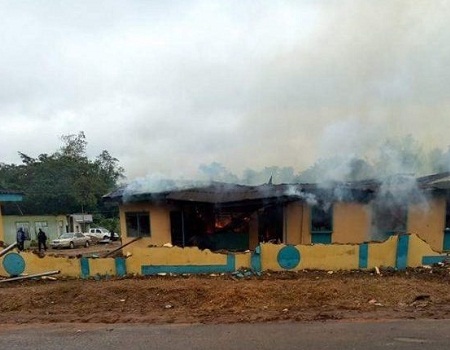 NO fewer than 31 suspects have been apprehended on Saturday by the authorities of the Osun State Police command for allegedly setting ablaze the Area Command Police Station in Iwo community on Friday.
It is recalled that irate youths on Friday morning allegedly torched the police station located around Adeeke neighbourhood to protest the Thursday killing of a 30-year-old student, identified as Tunde Nafiu by one of the operatives of Special Anti Robbery Squad (SARS).
Confirming the arrest of the suspects in a press statement forwarded to Sunday Tribune in Osogbo, the Police Public Relations Officer (PPRO) of Osun State Police command, Mrs Folasade Odoro said normalcy had been restored in the community.
She also hinted that the SARS officer that allegedly fired the shot, which triggered protest over the killing of the student had been arrested and transferred to the State Criminal Investigation Department (SCID)  for interrogation.
ALSO READ: Police invite Fani-Kayode over alleged inciting publications
According to Odoro, “the protest was hijacked by some hoodlums who took the law into their hands. In the process, they torched the buildings housing the offices and residence of the Area Commander as well as three patrol vans and two other vehicles belonging to the officers of the Area Command. The Police exercised serious restraint in order to prevent further loss of lives”.
She continued, ” the hoodlums were eventually dispersed while 31 of them were arrested and undergoing interrogation. The situation has been brought under control while people are going about their lawful businesses. The Commissioner of Police, Olafimihan Adeoye visited the scene for on the spot assessment and reassured members of the public that the erring officer will be made to face the full wrath of the law”.
While lamenting the havoc wrecked by the hoodlums, the statement quoted the police boss to have commended the officers and men for resisting every temptation to open fire on the rampaging youths, just as he reaffirmed the commitment of the Inspector-General of Police to the effective security of lives and property and protection of human rights.
The statement reads in part, “the Commissioner of Police also visited the Oluwo of Iwoland, Oba Abdulrasheed Akanbi. The traditional ruler commended the Police for exercising restraint despite the very unruly behaviour of the rampaging youths.
He informed the Commissioner of Police that an alternative accommodation has been provided to house the Area Command Headquarters while immediate steps will be taken by the community to renovate the torched facilities”.
Meanwhile, Adeoye, on Saturday visited the parents of the Late Tunde Nafiu at their residence in Ile-Ogbo to convey the condolence message of the Inspector-General of Police to the family, where he assured that justice will not only be served but will be seen to have been served over the killing of their son.