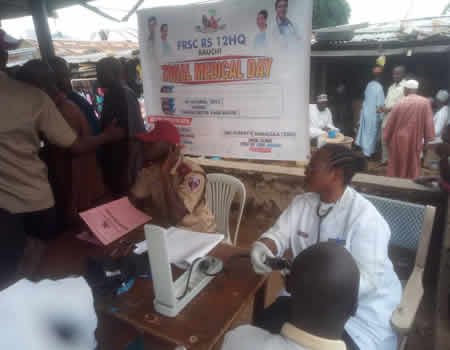 No fewer than 275 people have lost their lives in various automobile accidents between April and September 2019 in Bauchi, Borno and Yobe States, which make up the Zone 12 Command of the Federal Road Safety Corps (FRSC).

The figure was given by the Zonal Commander, Federal Road Safety Corps (FRSC), Assistant Corps Marshall, Imoh Etuk, at the Zonal Mega Rally/Medical Outreach in preparation for 2019 ‘Operation zero’ at the Yankari Motor Park in Bauchi saying also that 1,561 people sustained varying degrees of injuries in the Zone within the same period.

Imoh Etuk who said that the theme for the rally is: ‘Road Safety is a state of the mind, road traffic crash is absence of the mind: Stay alert and stay alive’ added that 2,495 were involved in the 320 road crashes that occurred within the same period in the zone representing a 42.4% increase in road traffic crashes and a 6.77% increase in fatality.

He further explained that between April and June 2019, there were 132 road traffic crashes which killed 133 people and injuring 726 people adding that from July to September, no fewer than 142 people were killed while 836 sustained varying degrees of injuries in the 188 accidents that occurred in the zone.

The FRSC boss said that, “The Corps mandate for 2019 is to reduce RTC (Road Traffic Crashes) by 20% and fatality by 25%, therefore, all hands must be on deck, since safety is everybody’s business.

” However, ember months were known with behaves of festivities such as Christmas and New Year celebrations. At the same time, it is also a period of harvest for farmers, bringing their farm produce home which result into high vehicular movement on the highways”, he said.

Imoh Etuk added that, “This is why we are here today to sensitize you on the proper use of the highway to make it safe by observing all traffic rules and regulations. I am calling on all drivers to stay off drugs or any stimulant, say no to over speeding and overloading. Speed trails, but remember it is only that living that celebrate.”

He also called on drivers to regularly maintain their vehicles before embarking on any journey and warned them to avoid dangerous driving.

Highlights of the rally was the free testing of driver’s blood pressure and eyesight in order to ensure that they are medically fit to engage in driving on the highway.