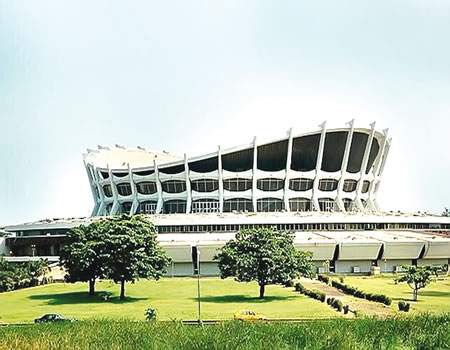 The Governor of Central Bank of Nigeria (CBN), Mr Godwin Emefiele has projected that over 25,000 people would be engaged in different sections of work at the National Theatre when fully renovated by the Bankers Committee in the next 15 months.

Emefiele disclosed this on Sunday at the handover of the National Theatre Iganmu, Lagos to the Bankers Committee.

He expressed joy that the signing of the contract for the restoration and refurbishment of the National Arts Theatre has become a reality, bringing to fruition, the commitment made by the CBN and the Bankers’ Committee a year and a half ago.

His words: “Massive job creation in this upsurge of creative entrepreneurship starts now. We anticipate that there would be at least 10,000 direct and indirect jobs created during the construction of the Lagos Creative & Entertainment Centre.

“We also project that over 25,000 people would be engaged in different sections of the centre when the Signature Cluster is completed, with an anticipated multiplier effect of other job opportunities.”

According to Emefiele, the National Arts Theatre is one of the most iconic buildings in Nigeria and despite its current state, nearly 45 years after it was built, it has continued to inspire the creativity of Nigerians, especially amongst the teeming youthful population.

He added that the idea behind the project christened: “Lagos creative and entertainment centre,” is to restore the glory of an iconic building by aligning most of the fabric and equipment and facilities in the building with the aesthetics of the 21st century, and secondly “to develop an ecosystem of creative hubs on the adjoining 44-hectare parcel of land,” stressing that the new facility will complement and enhance the National Arts Theatre.

He further explained that the Bankers’ Committee is providing funding for a prototype cluster located to the north of the National Arts Theatre, a development that is labelled the “Signature Cluster”.

This facility will be a convenor – providing space, support network, business development and community engagement for the creative, cultural and technology sectors.

“The Signature Cluster will consist of a building each for Music, Film, Fashion and Information Technology verticals. In addition to these, a Welcome/Visitor’s Centre, Police and Fire Stations, and structured parking for up to 500 vehicles will be built.

“Consequently, the 44 Hectare site adjourning the National Theatre will be developed and utilised for the development of purpose-built creative hubs for the Fashion Industry, Music and Film as well as Information Technology (IT).

“The aim is to deliver a successful Creative and Entertainment city that will encourage additional investment into Nigeria’s creative industry,” Emefiele stated.

Giving a brief description of the projects, Emefiele said the Fashion building is a full-fledged apparel production facility with textile showroom, retail and photography spaces and teaching laboratories, while the Music building will house recording studios with all front and back-end spaces and facilities.

An amphitheatre according to him, has been designed to adjoin the Music Hub in the master plan, while the film facility consists of stage set-up areas as well as all back-end spaces necessary for full production of films.

He added that the information technology facility consists of co-working and co-living spaces, training facilities and indoor and outdoor breakout clusters, all carefully designed to ensure that interface with the creative users is enhanced.

“In addition to the four signature buildings, other support facilities which include multi-storey parking to accommodate 500 cars (the National Theatre currently has dedicated parking for 250 cars), a police station, a fire station and a visitors’ Welcome Centre will be built.

“The Welcome Centre which sits at the heart of the “civic” master plan will house commercial and retail facilities, administration & management offices amongst others.

Working with environmental and hydrology specialists, the existing natural ecosystem that has been formed over the decades will remain largely undisturbed and preserved, ensuring an interplay between nature and the built environment,’ he disclosed.