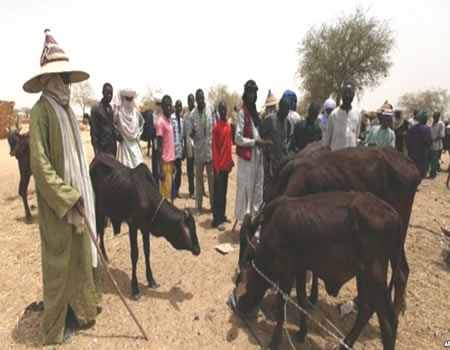 Not less than 25 Fulani associations under the aegis of Concerned Fulani Leaders distanced themselves from the recent endorsement of President Muhammadu Buhari by Miyetti Allah.

Speaking at a news conference in Kaduna on Tuesday, the leader of the groups, Alhaji Walid Jibrin remarked that the recent decision of the National Executive was not in the interest of the Fulanis.

“The recent involvement of Miyetti Allah into partisan politics is very unfortunate and a cause for worry to all Fulanis in Nigeria especially when one looks deeply into the constitution, the association is not political.

He said Miyetti has a Board of Trustees under the chairmanship of the Sultan of Sokoto, while the Emir of Zazzau, Emir of Kano, Lamido of Adamawa, Emir of Katsina as members.

In addition, it has grand patrons with a number of Fulani elders as patrons.

The Sarkin Fulani Dangi Nassarawa contended that neither the National Chairman can take any major decision on behalf of the BoT, patrons and registered members without a motion and fully seconded at the Annual General Meeting (AGM).

Jibrin maintained that such decision taken recently by the Miyetti Allah without the knowledge of the BoT and the patrons and majority of the registered members is likened to anarchy and disrespect to our invitation of and dragging our paramount traditional rulers into politics.

To this end, Jibrin who is also the Sarkin Yakin Dangawa, Tumaki in Katsina state, called on Miyetti Allah to apologise to the Sultan of Sokoto, Emir of Kano, Emir of Katsina, Emir of Zazzau, Lamido of Adamawa.

He said, “Concerned Fulani groups in Nigeria including our respected Ardos and members of the Fulani up-to 25 Fulani associations will soon meet to counter the so-called stand of the already fractured and divided association.

“The representatives of these Fulani groups will attend the Fulani conference which will hold very soon in one of the states in the North and tell the whole world their stand in the forthcoming election.”

Don’t associate us with your travails, Miyetti Allah tells Mailafia