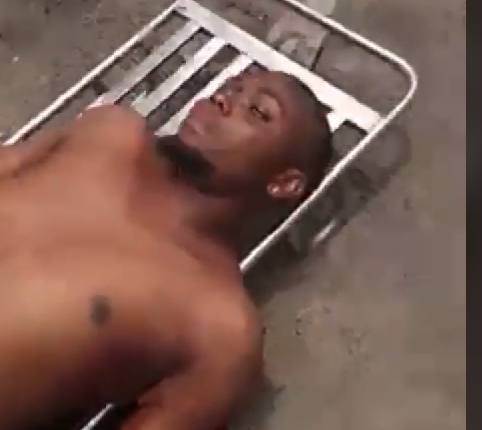 A pregnant woman, Faith Okiemute, has hacked her husband to death over an alleged extramarital affair in Delta.

The incident happened on Monday just as it was gathered that the woman has a two-year-old child for the deceased and is currently pregnant.

Sources said the lady, after allegedly committing the crime, fled to the Ughelli ‘A’ Division Police Station probably to escape jungle justice – a development that led friends and families of the man tobring his remains to the police station.

“The woman was angry that her husband did not spend the night at home and after his return, she macheted him in one of his hands and abdomen.

“She ran to Ughelli ‘A’ Division police to report herself while friends of her husband rushed him to the Ughelli Central Hospital where he was confirmed dead.

“Angered by his death, the friends brought and dumped his corpse at the entrance of the Ughelli ‘A’ Division of the Nigeria Police which led to sporadic shooting by the police to disperse the crowd,” the source revealed.

Meanwhile, details of the deceased’s extramarital affairs could not be obtained as of the time of filing the report.

When contacted, the Delta State Police acting Public Relations Officer, DSP Bright Edafe, confirmed the incident, adding that the case is receiving the attention of the state command.

In spite of the huge investment in the water sector by the government and international organisations, water scarcity has grown to become a perennial nightmare for residents of Abeokuta, the Ogun State capital. This report x-rays the lives and experiences of residents in getting clean, potable and affordable water amidst the surge of COVID-19 cases in the state.22-year-old pregnant wife hacks husband to death over alleged extramarital affairs in Delta