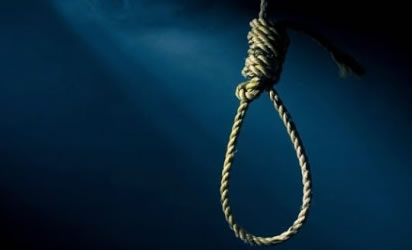 hangmanThere was pandemonium in Osogbo, Osun State in the early hours of Wednesday, when tenants of an apartment located around Alleluyah area of the city discovered the dangling body of a 22-year-old man who allegedly committed suicide, Saturday Tribune’s investigation has revealed.

Our correspondent reliably learnt that the sad development threw the entire neighbourhood into mourning as some people close to the deceased, identified as Lekan Wahab, expressed shock over his death.

Credible sources hinted that the incident occurred at a residence, located at  Road 4 Zone, Alleluyah Estate, where co-tenants discovered the dangling body of Wahab in a two-room apartment, having allegedly committed suicide.

Other tenants in the house to raised the alarm on sighting the body of the deceased, who was said to be seeking admission into the Federal Polytechnic, Ede.

However, he did not leave a suicide note, thus compounding the actual reason that compelled him to take his life.

Speaking during a telephone chat with our correspondent, she simply stated, “We have started investigation”.