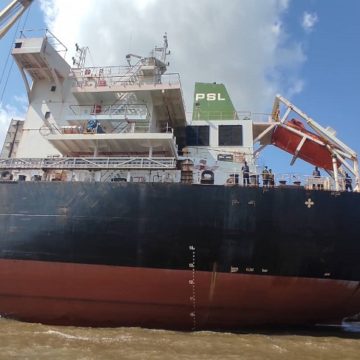 Twenty-two Thai citizens were, on Thursday, detained at the Nigerian Navy Ship (NNS), BEECROFT, Apapa, Lagos, over their alleged attempt to smuggle 32.9kg cocaine from Brazil to Nigeria.

The suspects who are sailors were arrested on-board MV CHAYANEE NAREE, by the joint team following an intelligent report it got from the UK Border Force.

It was learnt that the cargo ship left Santos in Brazil on September 19, 2021, and the UK Border Force discovered that the vessel was heading to Nigeria.

All 22 crewmen are being detained on board the ship at the Lagos Port Complex while the investigation continued.

Addressing media men on the arrest, the Commander of NNS BEECROFT, Commodore Bashir Mohammed, said the brief is aimed at informing the public on a development within the nation’s maritime environment that concerns a recent sting operation conducted through collaborative efforts between the Nigerian Navy and other Law enforcement agencies including the Interpol, the Nigerian custom services, Nigerian Ports Authority (NPA) and the NDLEA.

Commodore Mohammed said the joint security team, acting on credible intelligence from Interpol, naval officers, commenced tracking of a vessel, MV CHAYANEE NAREE, which was suspected of attempting to smuggle narcotics into Nigeria.

He said with the aid of the Nigerian Navy Falcon Eye Maritime Domain Awareness system, the security team started monitoring the movement of the vessel.

He said during the investigation it was discovered that the vessel departed Santos Brazil on September 19, 2021, and drifted for a week at a position about 250nm (approximately 500 kilometres) off the coast of Benin Republic from October 1 to October 8 before setting sail and arriving Nigeria on October 8, 2021.

“Upon entering Nigerian waters, the vessel was intercepted by Nigerian Navy Ship EKULU and escorted to NPA port where she was directed to berth on October 9, 2021, and taken custody by the Navy. Thereafter, other agencies were invited to conduct an extensive and comprehensive search of the vessel for narcotics and other contraband items.

“The suspected vessel was thoroughly searched by a combined team of Nigerian Navy, Interpol Nigeria, Nigerian Customs Service and Nigeria Drug Law Enforcement Agency. The Search began on October 9, 2021, and at about 6 pm on October 13, 2021, the efforts of the search team were rewarded when a bag was found in the Vessel’s Cargo Compartment One. Tests conducted on the contents of the bag by the NDLEA confirmed the substance to be cocaine wrapped in 30 slabs weighing 32.9 kg. Accordingly, the substance was handed over to the NDLEA while further search and investigation continued on every nook and cranny of the vessel,” he added

Also speaking on the arrest and seizure, the Customs Area Controller, Apapa Command, Ibrahim Malanta Yusuf, said it is gratifying to point out that, the success of the operation as a result of the excellent synergy and collaborative efforts between the NN, Interpol Nigeria, National Drug Law Enforcement Agency and the Nigeria Customs Service.

He said as the Investigation progress jointly and the continuous search of the Vessel, additional information will be released to the press on the case.

“The desired end state by all parties involved in the prosecution of all those involved in this nefarious act according to the laws of the land,” he added.

Verdict: The viral WhatsApp voice note claim is a hoax. The content is not new and has been circulated as a broadcast message several times in the past.22 Thai sailors arrested over attempt to smuggle 32.9kg cocaine into Nigeria