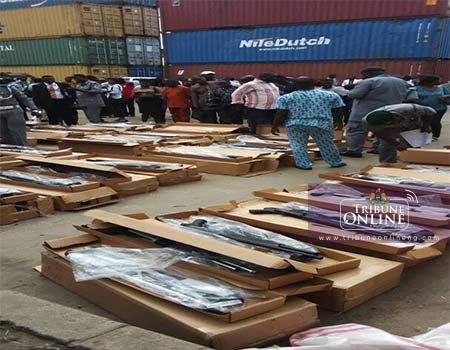 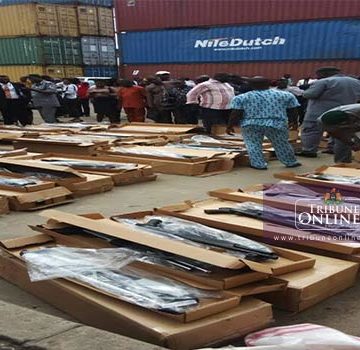 A total of 21,548,608 arms and ammunition was shipped into Nigeria illegally between 2010 to 2017, investigations have revealed.
According to the data obtained from the headquarters of the Nigerian Customs Service (NCS), the largest cache of ammunition of 21,407,933 live ammunition was intercepted at the Apapa port in November 2010 while 1,100 pump action guns were seized at Tin-Can port in September of 2017.
According to a breakdown of arms and ammunition seized at entry points of the country since 2010 and obtained exclusively by Sunday Tribune, one Ak-47 was seized at the Murtala Mohammed International Airport (MMIA) on the 20th of January, 2010.
Also in January of 2010, on the 23rd precisely, one Arg-3gun and 2,352 quantity of Pepper bullets/Co2 were intercepted at the MMIA airport in Lagos.
516 Pietro Pistol Barreta with 85 Live Ammunitions was seized on the 2nd of June, 2010 at the Ports & Terminal Multi-service Limited (PTML) facility in Tin-Can ports in Lagos.

On the first day in November 2010, 21,407,933 live ammunition and 34,062 Bomb Mi/Grenhand/Fuze of Rockets was seized at the Apapa port.
The following year of 2011 witnessed the least amount of arms shipment into the country as only one Remington pistol and 15 quantity of 45 calibre ammunition was seized at the PTML terminal in Tin-Can port in Lagos on the 24th of February, 2011.
In 2012, 3000 live ammunitions was intercepted at the Idiroko border on the 13th of September, 2012.
2013 was a year of different arms and ammunitions seizures as six different arms and ammunition were seized in different locations at different periods in the year. On the 26th of January, 2013, 1,800 live ammunitions was intercepted at Sahuda border in Adamawa State. Also, on the 2nd of April, 2013, one Barette pistol and 49 live ammunition were seized at the Murtala Mohammed Airport Command of Customs in Lagos.
In the same month, precisely on the 24th of April, 2013, one Air Soft gun of Zinc Alloy Shell pistol and 5 Rubber bullets pellets was also seized at the Murtala Mohammed Airport Command of Customs.
On the 17th of May, 2013, 56,750 live cartridges were seized in Shaki in Oyo State; while 149 jackknives were intercepted at Koko in Kebbi State on the 13th of May, 2013.
Three Sniper Rifles and 140 live ammunition was seized at the PTML terminal in Lagos on the 17th of September, 2013, completing the haul of seizures made in the year 2013.
The following year of 2014 was not different from 2013 as four seizures were made in different locations across the country that year.
On the 26th of February, 2014, 1,142 live cartridges of 12grammes was seized at the Murtala Mohammed Airport Customs command in Lagos; while 30,000 live cartridges of 7.2mm were intercepted at Shaki, in Oyo State on the 11th of March, 2014.
On the 18th of June, 2014, 120 Jack knives were seized in Sokoto State, while one Remington pistol and 20 cartridges were seized at the Murtala Mohammed Airport Customs command in Lagos on the 24th of December, 2014.
In 2015, on the 8th of July, 2 Air Softgun and one ammunition was seized at the Cargo shed of Nnamdi Azikiwe Airport in Abuja; while on the 24th of same month, 2 Ak-47 Rifle and 60 live ammunition were intercepted along Ife-Ilesha expressway in Osun State.
Also on the 24th of July, 2015, 20 Jack knives were intercepted at the Murtala Mohammed Airport Customs command in Lagos.
In 2016, 510 live cartridges were intercepted in Agbara, Ogun State on the 9th of January, 2016; while a Revolver gun was seized at Tin-Can ports on the 26th of July, 2016.
On the 10th of November 2016, three Unnamed Aerial Vehicle Drone was intercepted at the Lagos Airport while two Fighter Jets Helicopters was also intercepted at the same airport on the 30th of December, 2016.
On the 16th of December, 2016, 7,504 Premier Hollow Air Gun Pallets/Tactical Rifles were seized at the Tin-Can port in Lagos.
On the 10th of February 2017, 150 Live Round of 9mm bullets was seized at the Lagos Airport, while 661 Pump Action guns were intercepted along Mile 2 axis of the Apapa-Oshodi express road on the 30th of January, 2017.
In May 2017, another 440 Pump Action guns were seized at Tin-Can ports; and in September of 2017, another haul of 1,100 pump action guns was seized at same Tin-Can ports in Lagos.
Explaining to Nigerian Tribune the challenges faced by the Customs in intercepting arms and ammunitions seizures at the seaports and border points, National Spokesman of the Customs, Joseph Attah labelled low compliance level on the part of importers as a major challenge confronting the Service.
In his words, “a major challenge in enforcing the law is down to lack of compliance on the part of importers.
“Nobody brings in dangerous consignments and declares that the container contains arms and ammunition. It is through rigorous examination by Customs operatives that these dangerous consignments are exposed.
“At the seaports, compliance is a major challenge. The compliance level is very low. People like to bring in prohibited consignments and then make false declarations.
“Also, lack of equipment that can help discover these dangerous consignments also put pressure on Customs in their quest to nip shipment of dangerous cargoes into the country.
“This has made the Customs to go the extra mile in intercepting dangerous cargoes. That is why we have adopted 100 percent examination at the ports, even though it’s time-consuming and very stressful.
“In the absence of equipment to discover this arms and ammunition imports, we are increasingly relying on intelligence to nip this dangerous imports in the bud.
“At our land borders, the porosity of this borders is a challenge. Especially in the dry season, everywhere is a road for this smugglers.
“Lack of cooperation by some border communities is another challenge. Some of this communities are induced by rich smugglers. The smugglers give the community leaders money and in turn get cooperation from the community.
“If Customs patrol is heading to point A along the border, members of such communities inform the smugglers, thereby frustrating government effort in tackling the menace of smuggling.”
AmmunitionArmsCustom
Share

VIDEO: Police nab gunrunners with ammunition and charms for bandits