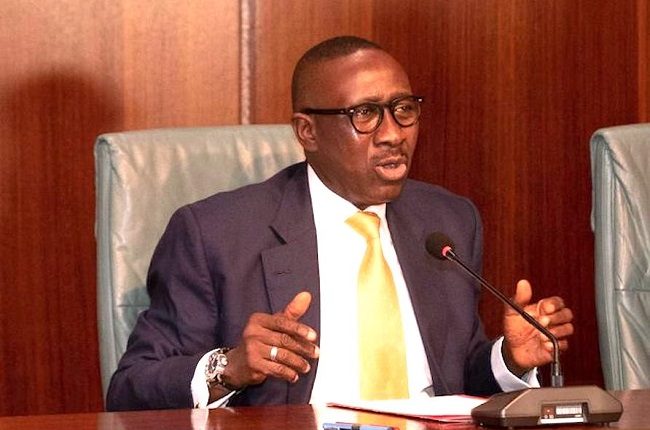 Share
National Security Adviser, Babagana Monguno, has said certain chieftains of political parties whose activities, and pronouncements are capable of undermining the conduct of off-season elections and the next general elections are being watched by the various security agencies in the country.
Monguno made the disclosure on Friday in his remarks at the meeting of the Inter-Agency Consultative Committee on Election Security organized by the Independent National Electoral Commission (INEC).
Represented by Sanusi Galadima, the NSA  said such individuals are under close monitoring of the security agencies alongside their sponsored thugs for possible arrest and prosecution.

Monguno, who expressed concern over what he called worrisome development trailing yet to be conducted party primaries, advised stakeholders in the 18 political parties to stick to the rules guiding the electoral process as he noted that lack of sincerity to rules of engagement in party primaries and even manifestoes could threaten peace in the country.

He said: “The NSA has noted with utmost concern, the growing uncertainty heralding the conduct of party primaries for 2023 elections. This is in addition to the unabated spate of violence that threatened the upcoming off-cycle gubernatorial elections in Ekiti and Osun States, arising from internal party wranglings, increasing acrimony and bickering amongst political actors as well as the inability of various contending political blocs to amicably resolves differences in line with democratic tenets.
“Consequently, the above disturbing development has already culminated in intense power-play capable of heightening unnecessary political tension across the country. More worrisome are the unguarded utterances of some highly respected individuals and groups which more often than not amplify divisive narratives to the detriment of national security and stability.
“Accordingly, heads of security and law-enforcement agencies have been tasked to step up close monitoring and profiling of political actors no matter highly placed who exhibit tendencies to subvert the electoral process, even as thugs and their sponsors would equally be trailed for possible arrest and prosecution.
” Finally, the NSA, emphasises the need for INEC to enjoin political parties to consistently abide by prescribed rules as outlined in their respective manifestoes. This is to significantly reduce areas of conflict and ensure a peaceful atmosphere for a hitch-free off-cycle and general election.”
In his presentation, the chairman of INEC, Professor Mahmood Yakubu, who restated the commission’s concern over security challenges, told the gathering of INEC National Commissioners and heads of security agencies that Resident Electoral Commissioners have been directed to “provide basic data on areas of security challenges in their states, including citizens living in Internally Displaced Persons (IDP) camps.
“Our idea is to harvest the data as a basis for further engagement with the security agencies as well as devising the best way to provide electoral services to all Nigerians under all circumstances.”

It is illegal, unconstitutional for Malami, Ngige to withdraw resignation letters —Falana

Three staff of Dangote cement killed in road accident, many injured in Kogi