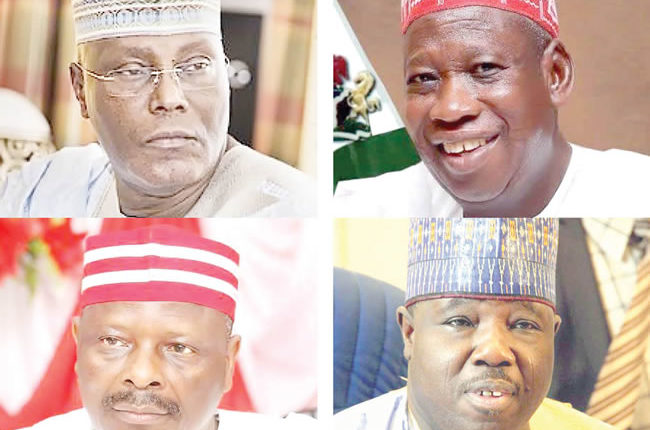 With the seeming non-committal of the main parties to power rotation as the journey to 2023 progresses, different forces in the North intensity move to secure presidential tickets. KUNLE ODEREMI writes on the moves and permutations across the North.

THERE are frenzied movements across the three geopolitical zones in the North in the bid for the seat of the next president of the country. Several power brokers are leading consultations, discussions and meetings to build bridges of cooperation and understanding in the quest by the North to consolidate in power in the next dispensation. In the ruling All Progressives Congress (APC), there are varying permutations as the power brokers attempt to outwit one another, with the hawks capitalising on the prevalent crevices on the wall of the party across board. While President Muhammadu Buhari, the de facto leader of APC, is keeping many party faithful guessing on where he stands on power shift, a few of his close allies and associates are being linked to lobby groups working for certain interests in the contest for the presidential ticket of the party.

With a clear signal that both PDP and APC are non-committal to power rotation, major power brokers are stepping up consultations across the three geopolitical zones in the North in the quest to retain power in 2023. At one level, the permutation is to evolve a consensus candidate for the contest; at another level, the discussion centres on the possibility of a zone in the North producing two strong candidates to guarantee that power goes to their zone; the third level is about the determined individual bid by some presidential hopeful to lobby influential groups and individuals in certain zones. Checks indicate that series of consultations have been lined up for the next few days by the leaders, especially in PDP, though similar consultations have been held across the three geopolitical zones and the Federal Capital Territory, Abuja. There is a strong push for the possibility of consensus presidential material from the North, but the effort is yet to gather momentum among the power blocs due to individual ambitions.

Schism or cracks are also manifesting over the vice presidential slot, especially among the governors of the ruling APC in the North. Governors of Kaduna, Kano and Borno are on the radar of some prominent groups and individuals as possible choice as vice presidential hopefuls. But, major stakeholders, especially Borno elders have refused to buy into the attempt to make Borno State governor, Babagana Zulum run for the vice presidency. According to sources, the elders prefer he be allowed to continue and concentrate on the good work he has started in the insurgency-ravaged North-East zone. But the pro-Kaduna governor group wants him to run with Vice President Yemi Osinbajo if the latter eventually throws his hat into the ring. Another group is said to favour that Governor Abdulahi Ganduje runs as vice to former Lagos State governor, Senator Bola Tinubu. A plethora of groups is campaigning that Tinubu contests as possible successor of President Muhammadu Buhari.

For the main opposition, PDP, the governor of Sokoto State, Aminu Tambuwal appears the major contender for the PDP presidential ticket so far from the North-East. The bid by other PDP stalwarts from the zone is still within the realm of speculation. In the North-West, loyalists of a former governor of Kano State, Dr Musa Kwankwaso are promoting his speculated presidential bid, Generally, in the PDP, the camps of a former president of the Senate, Dr Bukola Saraki, former Speaker of the House of Representatives and current governor of Sokoto Honourable Tambuwal and former vice president, Alhaji Atiku Abubakar are abuzz with activities in their efforts to secure the presidential ticket of the party. Suffice it to say such activities are characterised by varying permutations, consultations and strategies designed at getting the presidential ticket. For example, leaders of the North-Central zone, across the various parties, are said to be making conscious move to forge a common front in bid for the presidency, with the mantra of their campaign being the need for justice, equity, and national unity. According to sources, top-level meetings are being held in the federal capital, Abuja, as well as Plateau, Benue, Nasarawa, Kwara, Niger and Kogi states, with the campaign being handled at different levels with members of the National Assembly from the zone. Those behind the push include former members of the National Assembly, present and past governors from the zone, as well as speakers of the state Houses of Assembly, retired top military brass, business moguls and traditional rulers, all of whom have been mandated to propagate the North-Central agenda to their colleagues, friends, and associates from the other geopolitical zones, because their belief is that this time, their counterparts in the North West and the North East zones should support their agitation to produce the next president. The North Central leaders are set to start sending emissaries to all the other geo-political zones where they will meet other leaders and persuade them to help make the idea of a Nigerian from the North Central zone possible the way they did in 1999 when the entire country was made or persuaded to elect a Nigerian President from South west. The gains of the unity, strength, and vigour built during that time show it was still the best since the return to democracy.

According to them, their agitation is supported by historical facts, the principle of justice and equity, that since 1960 when Nigeria became independent, the zone has solidly been resolute on the oneness of Arewa. The bid by the zone is against the backdrop of the strategic role it played during military interregnum. The North Central was pivotal in sustain the corporate existence of the country following the 1966 putsch that aborted the First Republic. One of the leaders argued: “From Shagari to Obasanjo, Yar’Adua, Jonathan and Buhari, this our zone decides who becomes the President. We are tired of being kingmakers. We want to produce the King because we have numerously qualified, experienced and connected individuals given its heterogeneity or diversity.”

Another argument of the area is that it is the only zone that has neither produced a president nor vice president since the advent of the country. This fact, they stated, placed them in a worse situation than that of the South East which between 1979 and 1983 produced the late Vice President Alex Ekwueme, and the thinking is that the current agitation was inspired by the success of the South-South zone which ended up producing a vice president and president in Dr. Goodluck Ebele Jonathan, who served as vice president for three years and as president for five years. Thus, a leader in the North Central zone said the success of the South-South in producing a president has imbued confidence, the spirit of nationalism, and patriotism in the north-Central.

It is against this backdrop that the leaders are encouraging all those qualified to be president to join the race in their respective political parties and provide solid backing for the zone’s bid. According to some observers, the battle for the presidential slot has just begun. How the second phase would be is a matter of weeks as the parties step up preparations for other critical stages meant to produce standard-bearers for the 2023 presidency.

APC chairmanship and Buhari’s men in the race

Before last week, there was growing scepticism in some circles in the ruling All Progressives Congress (APC) about the sincerity of interim national leadership to hold a convention. Some had insinuated a purported hidden plan by the leadership to railroad themselves to substantive national officers.

But the announcement of February 2022 has rekindled hopes across board of an opportunity to elect a new executive that will succeed the Ma Buni-led interim leadership. The announcement has led to frenetic moves by chairmanship hopefuls, with their loyalists and foot soldiers lobbying major stakeholders in the party for their principals.

Drawn from different backgrounds, each of the eight contenders for the position have a date with history in February, going by the ongoing intense scheming and politicking ahead of the convention. There are reports of consultations and discussions for possible alignment and re-alignment of forces by different forces ahead of the convention. Pundits are saying both internal and external factors might determine APC national chairmanship. In fact, one of the issues many are talking about is the possibility of integrity and transparency of the contestants, especially on their record of service at higher levels in both public and private capacities.  And so far, former governors, serving senators and other categories of high profile are in the race. The list includes: Senator Abdullahi Adamu, who served as the governor of Nasarawa State from May 29,1999 to May 29, 2007; and his successor, Senator Tanko Al-Makura, between 2011 and 2019; as well as Senator George Akume, who is a former governor of Benue State and ex-Senate minority leader; he hails from Benue State. He is regarded as dogged fighter. The other contestant is Mohammed Sani Musa, the senator representing Niger East in the Senate; and Danjuma Goje, a former governor of Gombe State and also a Senator.

Also in the race are Mallam Saliu Mustapha, a former governorship candidate and chieftain of the defunct Congress for Progressive Change (CPC); Ali Modu Sheriff, former governor of Borno State; and Abdulaziz Yari, former governor of Zamfara State. Thus, some candidates are believed to have a record of being with President Muhammadu Buhari from his days in the All Nigeria Peoples’ Party (ANPP) to the Congress for Progressive Change (CPC) and now in APC. According to observers, these men may enjoy some degree of favour by their positions as the presidents’ men. Among those considered to be the president’s lieutenants are people who worked with him and believed in his vision from his days as an opposition politician struggling to win elections into the exalted seat that he now occupies. Among those jostling for the position, three candidates stand out as the President’s allies in ANPP through CPC and now APC. They are Tanko Al-Makura from Nasarawa State; Saliu Mustapha from Kwara State; and Muhammed Bello Mustapha from Taraba State.

Life and Times of Sound Sultan: The Top 5 Hits of His Musical Career

Bail and detention of suspects at the magistrate courts