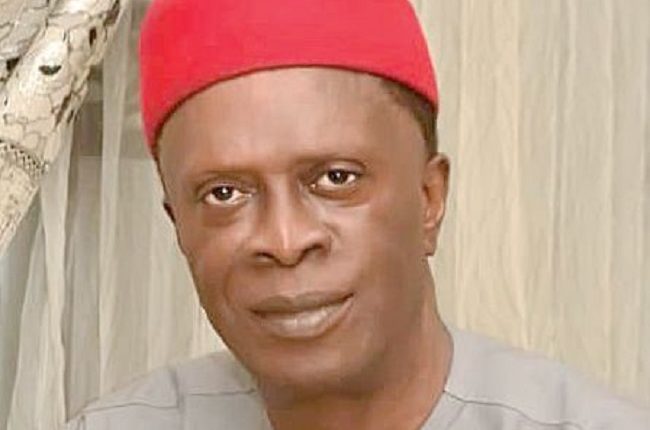 Anambra State Chairman of the All Progressives Congress (APC), Chief Basil Ejidike, has said that the outcome of the November 6, 2021 governorship election in Anambra State, would determine the fate of Igbo becoming the next president of Nigeria in the 2023 general election.

He also disclosed that the national leadership of the party was earnestly waiting for the remaining three governors in the South East region, Governor Willie Obiano (Anambra State), Governor Ifeanyi Ugwuanyi (Enugu State) and their Abia State counterpart, Governor Ikezie Ikpaezu, to join APC to pave way for official zoning of the presidential slot to the South-East zone.

Ejidike stated this during a stakeholder meeting with all the 21 LGA/326 Chairmen of the party in preparation for its campaign flag-off, held at Marble Arch Hotel Awka, on Wednesday night.

Speaking further, the Chairman said APC’s performance against all forms of insecurity in the country and the ongoing constructions and rehabilitations of abandoned projects of PDP 16-years administration across South-East and South-South zones, placed the party in better stead to win the Anambra poll and the 2023 presidential election respectively.

“If Governor Ben Ayade of Cross River State (South-South) could join APC to connect his people to the centre, why can’t our remaining South-East governors be part of the moving train, especially now that the zone is next to produce president in 2023 Presidential election? He asked.

He said; “I am glad to say with a sense of satisfaction that the growing fortunes and unity of the party in Anambra State and the South-east geopolitical zone, in general, has increased our hope for victory. This will no doubt increase our chances of winning the election with a landslide victory.”

While appreciating all the aspirants who are still in the party for believing in the supremacy of the party and for their love and commitment to APC, Ejidike reiterated that APC had no crises of any sort whatsoever in the state.

He assured members that the dividends of commitment and reward system would not elude anyone who worked assiduously in the course of winning this election.

He also urged members to accept the outcome of the party primary election from which Senator Dr Andy Uba, emerged as a candidate, noting that the party remained supreme.

Ejidike added that the capacity of the party to win the November 6, election was not in doubt as many personalities were now joining the party for good.

Spokesperson to Andy Uba Campaign Council, Honourable Chibuzor Obiakor, who also spoke with journalists shortly after the meeting, expressed confidence in the ability of his boss to win the November 6 governorship election in the state with a landslide.

“I wish to call on the officials, party stakeholders and our loyal party members to support the Campaign Council ‘Operation Win Your Polling Unit/Door-Door Mobilization campaign’ in achieving its set target of delivering Anambra State to APC.”

Obiakor urged the people of Anambra State to take advantage of the coming election to join and vote for the ruling party in order to change the poor narratives of the present APGA-led government.

2023: Outcome of Anambra election will determine fate of Igbo presidency

In spite of the huge investment in the water sector by the government and international organisations, water scarcity has grown to become a perennial nightmare for residents of Abeokuta, the Ogun State capital. This report x-rays the lives and experiences of residents in getting clean, potable and affordable water amidst the surge of COVID-19 cases in the state…    2023: Outcome of Anambra election will determine fate of Igbo presidency