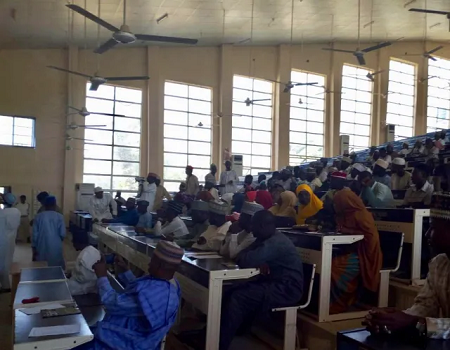 Ahead of 2023 General Elections, a group, Initiative for Conciliation and Right Protection (ICRP), has called for more involvement of Nigerians in electing credible leaders in future elections, adding that only adherence to rule of law can move the nation forward.

ICRP, which held its 2017 Summit in Lagos, was founded to enlighten the citizens on their rights and the protection of such rights.

The convener of the group, Ahmed Isa Shuaib, and other speakers, including spokesperson of Lagos chapter of African Democratic Party (ADP), Prince Adelaja Adeoye; Dr. Alfa Imam Abubakar, Barrister Neto Nwokolo, among others, said this in a joint statement made available to newsmen in Lagos on Wednesday, following conclusion of the 2019 Public Lecture with the theme: “Tour on Peace and Political Stability In Nigeria.”

This was just as they declared that the era where a section of the country or people would not vote and afterward be complaining about bad leadership should be over.

While identifying peace, unity and right protection as a bedrock for socio-economic growth, Comrade Shuaib said it was certain that Nigeria was blessed with both human and natural resources, contending that any country so blessed with such can sustain itself when being managed properly.

“Peace and stability must be at the hearts of all Nigerians for better results.

“Presently, we cannot dispute the fact that Nigeria has many problems which include corruption, crimes and terrorism specifically Boko Haram insurgency, kidnapping and banditry, infrastructure deficit, sad state of education and university system, unemployment, sexual harassment as well as the political and economic uncertainty,” he lamented.

Spokesperson of Lagos State chapter of African Democratic Party (ADP), Prince Adeoye, in his remark, said for peaceful coexistence to be established amongst Nigerians, the government must have a collaborative understanding with all citizens regardless of their religious or ethnic background.

According to him, the country is what it is today because of the lack of trust and mutual suspicion amongst various groups in the country.

“For instance, the issue of insecurity became heightened due to the ethnic colouration introduced into it, for us to have a peaceful impact and togetherness as citizens, we must be able to live together without any fear that those who are not from our ethnic regions will want to do us harm, look at the Military for instance, various ethnic groups are having issues with one another, all because of lack of trust.

“As a politician, I will like to state it the way it is and have always been, when a President is elected, he should become a leader and father of all, even to those who didn’t vote for him, but when those at the forefront of leadership begin to make divisive policies and statements, it is expected that those who the tide is turning against will react, more in negative ways, which will have severe impact on the peace and progress of the country and breed all kinds of agitations,” he said.

Adeoye, while recalling that Nigeria attained her independence in 1960 and had been “striving to bring everyone together for a solid and robust nation,” lamented that the gains sp far recorded by the country had been quite “very slow due to the obvious divisiveness.”

“We can close this gap with credible leaders. We can achieve a country where we won’t have to despise the other person because of their religion or ethnicity, leaders must be able to lead by example, this is what we need.

“Bad leadership is a fuel to insecurity, unstable economy and social vices, we are facing these menace because we are still struggling to install quality leadership, not only at the top level but from the lower ranks, we cannot blame only those at the top, the question we need to ask ourselves is that before these people emerged as leaders were they not members of our society?” he queried.

Another speaker, Comrade Austin Ameh, who is a PhD student, at Ahmadu Bello University (ABU), Zaria, stressed the need for the government to shun sentiments and work towards the unity of the people.

Dr. Abubakar, who represented the Shia Community at the event that was held in Lagos, called on the government to release leader of the Shiite Muslims, Sheikh El-Zakzaky; the publisher of SaharaReporters, Mr. Omoyele Sowore; Jones Abiri, Dadiyata, Steven Kefas, Agba Jalingo, Sambo Dasuki and other political prisoners as they posed no threat to all peaceful Nigerians.

Also speaking, Nwokolo, in his remark, contended that the key foundation for a prosperous and peaceful nation remained a not negotiable adherence to the rule of law.

According to him, this key factor appears negotiable within the Nigerian nation, pointing out that it was time to reverse the ugly trend in the country.

Nwokolo said there was the need for the government to build policies around the use of dialogue, conciliation, mediation, and other alternative dispute resolution methods in order to the “arrest conflict and foster unity” in the land.