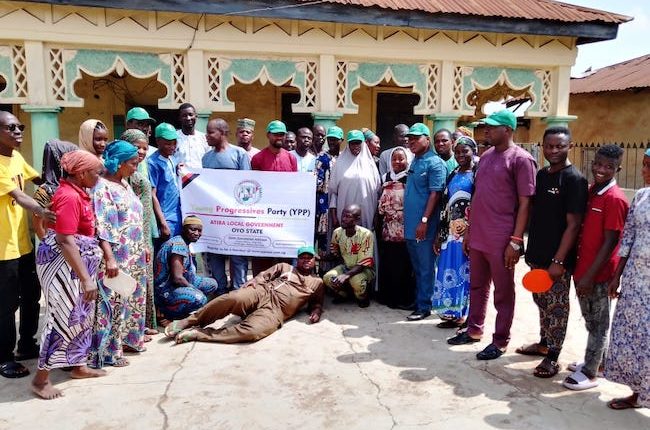 Young Progressives Party (YPP) in Oyo State has said that it is ready to vie for all elective positions in the 2023 elections.

Speaking with Tribune Online, the state chairman of the party, Prince Adeyemi Adedeji, said that the focus of the party was to organise young people to aspire and prepare to take over mantle of leadership in Oyo state.

Prince Adedeji said that the preparation is necessary, “especially now that young people have realised the essence of coming together on the party’s platform to canvass and vote for credible candidates”.

He noted that the years of promise and fail politics in the state, which he said the people of the state have experienced overtime, would come to an end if and when YPP is fully embraced and voted for in the coming 2023 elections.

Also, in an effort to prepare and place the party in a good position to win elections in Oyo state come 2023, Prince Adedeji said that the state executive working committee of the party visited nine local government areas in Ogbomoso zone of the state.

He also encouraged the party leaders to keep up the drive for membership and also the campaign for voters registrations and PVCs collections at the INEC designated collection points in their various local government areas.

The YPP chairman, who encouraged party leaders in the zones to be steadfast in their political pursuit and dream of ruling the state in the nearest future, charged them to go all out to canvass for membership among the teeming youths.

The party’s banners and some sensitisation materials were handed over to party leaders across the nine LGAs during the visit.

In spite of the huge investment in the water sector by the government and international organisations, water scarcity has grown to become a perennial nightmare for residents of Abeokuta, the Ogun State capital. This report x-rays the lives and experiences of residents in getting clean, potable and affordable water amidst the surge of COVID-19 cases in the state…YPP begins move  YPP begins move

The Lagos-Ibadan railway was inaugurated recently for a full paid operation by the Nigerian Railway Corporation after about a year of free test-run. Our reporter joined the train to and fro Lagos from Ibadan and tells his experience in this report…YPP begins move  YPP begins move