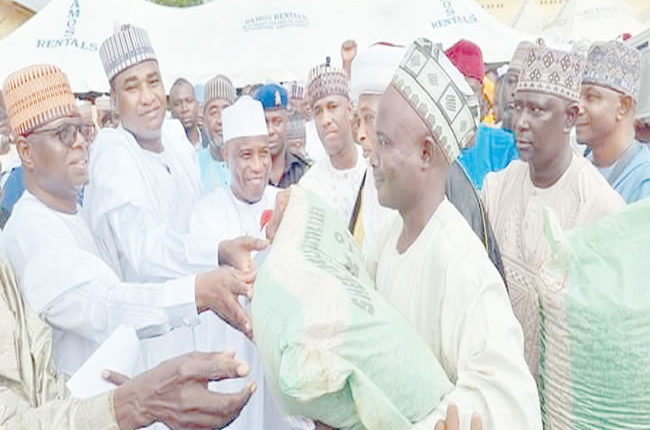 SOKOTO State governor,  Alhaji Aminu Tambuwal, on  Monday fagged off the sales and distribution of 100 metric tonnes of fertilisers for  the 2022 farming season in  the state.

The governor, while speaking  during  the unveiling of  the fertilisers, pegged NPK product at  N13,000  against N29,000 market price.

The governor, while giving out  warning against selling of the products to marketers, further explained that  80 per cent of Sokoto residents are farmers, stressing that Sokoto has comparative advantage of producing some crops because of its weather.

He maintained that his administration had secured N4billion Central Bank of Nigeria (CBN) intervention funds for 16,000 rice and tomato farmers in the state .

Tambuwal noted that his agricultural policy is yielding results, hence the establishment of Dangote Rice Mill and Morocco Fertiliser blending plant  at  Kware and Kalambaina respectively.

He encouraged civil servants and other categories of workers in the state to diversify their income by venturing into farming, while promising to assist anybody who ventures into farming with subsidised inputs.

He also disclosed that he is working  with  security agencies in the state to stem the tide of insecurity in rural areas, especially in the Eastern senatorial district, to enable them to go back to their farms.

Earlier, the state’s  Commissioner for Agriculture,  Professor  Aminu Abubakar Illela, had  thanked the governor for providing support to farmers in the area of fertilisers and other agricultural inputs.

He stated that measures were put in place to prevent the diversion of the product, promising that the product will go to the real farmers.