2019: We’ll present our own Presidential, Governorship, other candidates- PRP 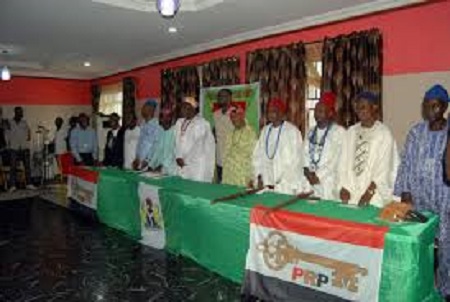 THE Peoples Redemption Party (PRP), on Wednesday, stated that it would present its own Presidential and other candidates for all the elective offices in 2019 general elections.

Chairman, Committee for a Holistic Review of PRP Documents and Operations, Mallam Lawal Batagarawa, who stated this in Abuja, while presenting a review document to the Chairman of the party, Alhaji Abdulkadir Balarabe Musa, said the party was in the process of repositioning itself with a view to playing a more prominent role in the nation’s political space come 2019.

Mallam Batagarawa said PRP, being a registered political party, was committed to present Presidential, Governorship, National Assembly and other candidates down toward levels in 2019 elections, saying the 40-member committee set up by the party chairman was to review the party’s basic documents for the elections beyond 2019 in Nigeria.

According to him: “We are here to present our report on the review of the basic documents of People’s Redemption Party (PRP) to the party Chairman, Alhaji Abdulkadir Balarabe Musa.

His words: “PRP since the first republic, has always formed an alliance with other political parties, depending on the circumstances we found ourselves in the country. This is because we are a national party, which is totally committed to Nigerian unity. So, have always ensured national unity, which is why we have gone into alliances, in the past, with different political parties, to ensure national unity and the Nigerian unity is always a process, which is something we have always been committed to.”

Court fixes April 17 for judgment on the removal of Ondo APC chair.

FRSC to certify vehicles on election duties from February 5