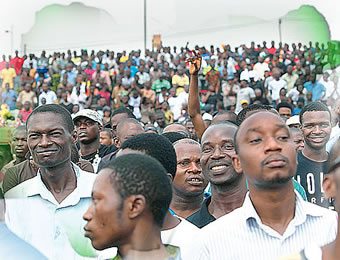 Dr Arthur Obiorah, the National President, Ohaneze Ndigbo Youth Worldwide made the disclosure in a statement made available to newsmen in Onitsha, the commercial city of Anambra on Wednesday.

Obiorah commended Atiku’s courage and wisdom for choosing the former governor of Anambra state as his running mate.

“This has gone a long way to show that there is still hope in the Nigerian project which emphasises unity,” he said.

“The two million man march, therefore, is our deliberate effort to prove the popularity of Mr Peter Obi and to express our confidence in the joint Atiku and Obi presidency come 2019 to rescue the nation from the current political, economic, social, insecurity and infrastructural quagmire,” he said.

Obiorah also said the march will serve as a campaign against violence during the elections.

He added that the group would use the medium to enlighten Igbo youths on the importance of casting their vote and avoid been used as thugs before and during the 2019 elections.

He said the exercise, which will hold on Nov. 18 in Awka and Onitsha, is expected to attract all Ohaneze youths from the seven Igbo speaking states of Anambra, Imo, Enugu, Ebonyi, Abia, Delta and Rivers.

Obiorah urged all Igbo sons and daughters to ensure they collect their Permanent Voters Card (PVC), noting that the rally will be a PVC rally in support for Atiku-Obi 2019 presidential election.

“We are ready to partner with individuals and other relevant groups as well as all Igbo sons and daughters, home and abroad to deliver Atiku/Obi joint ticket come 2019,” Obiorah added.