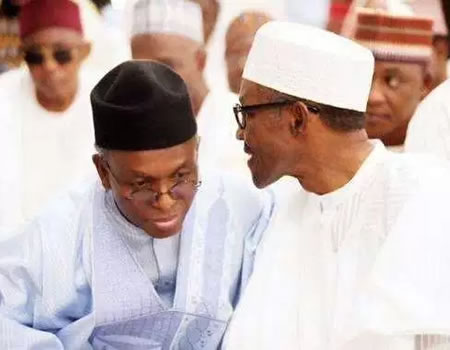 Governor Nasir el-rufai of Kaduna state has said only God and president Muhammad Buhari can decide whether he is going to re-contest the governorship election in 2019.

He made this declaration in a special phone in radio programme in Kaduna on Wednesday to herald his two years in office.
According to him, when he completed his assignment as a federal minister and another government showed interest in appointing him as a minister, again, he rejected the offer and said he was done with being a minister.
However, he insisted that the position of a governor is a different ball game that would be difficult for one to be assertive.

el-Rufai said only God can decide his faith in 2019 and the President Muhammad Buhari.
“If the president come and meet me and said I want you to re-contest or otherwise, I have no option than to obey his command.
“Afterall, in 2014 or thereabout, I had my own plans before the President asked me to contest the exalted position of the governor and the rest is now history.
He dispelled the insinuation that his government had received grants from Melinda Gates for some of the projects being executed in the state capital and its environs, maintaining that, “we have not only cut cost in governance but we have saved to carry out these projects.
“We were not reckless in our spending but we are very meticulous and prudent in our finances. Your money is safe.”
He also chastised those promoting division among the people to desist from doing so “as violence would only lead to destruction and not development.”
According to him, his administration had line up so many programmes for the youths, pointing out that, young and qualified youths would be recruited in the state civil service.