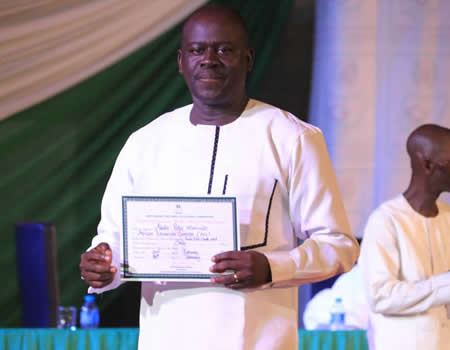 Member of House of Representatives-elect, Hon Abiola Makinde has dedicated his victory to God and appreciated his supporters as he received the certificate of return as the duly elected candidate into House of Representatives to represent Ondo East and West Federal Constituency at the 9th Assembly, in the last February 23rd National Assembly elections.

Makinde, joined other newly elected members for the National Assembly at the event organised by the Independent National Electoral Commission, INEC, to issue the certificate of return to duly elected members, at the international event centre, on Thursday, in Abuja

Makinde who contested on the platform of the African Democratic Congress, ADC, was declared winner of the election after he polled a total votes of 19,080 ahead of the candidate of the ZLP and incumbent member representing the Federal constituency, Joseph Iranola Akinlaja who had 14,651 votes, and APC candidate Jibayo Adeyeye who polled 11,935 votes.

Makinde, displaying the certificate of return to the admiration of his cheering supporters present at the event said, it is only God that has made it possible, saying he cannot thank God enough for the set of loyal supporters around him.

He equally thanked his supporter and the entire people of Ondo kingdom for supporting him through the campaigns to the elections to victory at the polls.

Speaking through his Public Relation Officer, Omo’ba Segun Adesemoye, Makinde said “This can only be God. I will always give him thanks for the loving and loyal supporters and the team he has given me.

“I want to appreciate the Ekimoguns for solidly standing by me throughout the campaigns all to the elections and saw that we were victorious at the polls. I deeply appreciate this opportunity given to me to serve”.

Makinde also reiterated his commitment to his constituents by representing well at the National Assembly.