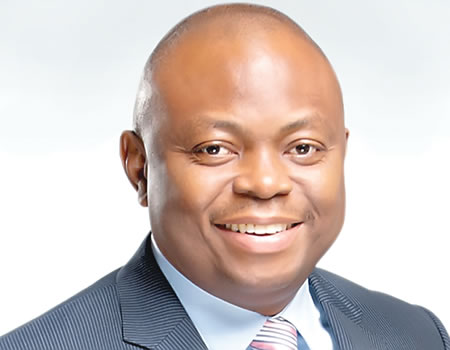 Despite the challenging environment in which it operated in the 2017 financial year, Fidelity Bank was able to post heartwarming results at the end of the year because of the diligence, creativity, deployment of appropriate technology and commitment to its shared vision demonstrated by both the board and management.

The 2017 financial year was a particularly difficult one for banks as it was marked by limited foreign currency liquidity, low financing opportunities, especially in the public sector space, and high cost of business operations. But by optimizing available opportunities and innovatively cutting down costs, Fidelity Bank was able to grow its gross earnings by 18.3 per cent to N179.9 billion from N152.0bn in the preceding year. The improvement was propelled by increased yield in the bank’s earning assets, which soared by 15.4 per cent and precipitated a 22.4 per cent rise in interest income to N150.7billion.

In the year under review, the bank saw growths in earnings from its portfolios, including trade finance, account maintenance fees and forex income, which grew by 16.6 per cent, 49.8 per cent and 20.9 percent respectively.

There was also a giant leap in earnings from digital banking which accounted for 25 per cent of the bank’s fee-based income. The increase was fuelled primarily by customers’ adoption of mobile and internet platforms. This improvement in mobile and internet penetration helped the bank to reduce vault cash holding by as much as 21 per cent.

Fidelity’s focus on digital banking also impacted positively on the bank’s operational efficiency as total operating expenses declined by 2.3 per cent to N65.7 billion leading to its cost-income ratio dropping to 67.5 per cent from 77.3 per cent in the 2016 financial year. As a consequence of the ease of deployment of its digital platforms, over 35 per cent of customers self-enrolled on its mobile/internet banking products. Similarly, over 75 per cent of customers transactions are now done on electronic channels while the bank hopes to hit 80 per cent in the 2018 financial year.

The Managing Director, Mr Nnamdi Okonkwo, in his comment, attributed the bank’s strides to discipline, and strategic focus: “We were able to sustain our performance trend on a quarterly basis through disciplined balance sheet management, strategic cost reduction, increased focus on the corporate, commercial, SME segments and continued execution of our retail and digital banking strategy.”

According to the CEO, 2017 financial year was a landmark year for the bank “as we returned to the international capital markets and issued a very successful $400m Eurobond, commenced the interim audit of our financials to improve our governance process, and delivered a strong set of results through the disciplined execution of our medium-term strategy”.

Providing a glimpse on how the feat was achieved, Okonkwo said, “The implementation of the initiatives from our Business Process Review Project anchored by one of the top audit firms in Nigeria continued to impact positively on our operational efficiency as total operating expenses declined by 2.3 per cent to N65.7 billion leading to a drop in cost-to-income ratio to 67.5 per cent from 77.3 per cent in 2016 financial year. The combination of the strong net revenue growth of N6.9 billion (12.9 per cent growth) and the decline in total expenses by N1.5 billion translated to a N9.1 billion (93.7 per cent) increase in Profit After Tax (PAT) to N18.8 billion from N9.7 billion in 2016 financial year.”

In the year under review, the bank had a strong showing in Net Interest Assets (NIM) with a 7.3 per cent rise. This was despite the reduction in yields on liquid assets in the third quarter. But in the first quarter, growth in the yield on its earning assets outpaced the increase in funding costs, leading to average yield on earnings assets of 15.4 per cent compared to an average funding cost of 7.2 per cent.

Although it was a year in which total deposits slumped by 2.2 per cent to N775.3 billion from N793.0 billion in the preceding year due to the high yields on fixed income instruments and specific one-off deposit payments, the bank’s retail banking strategy was enough to mitigate the effect of that as savings deposits increased by 15.2 per cent to N178.6bn and accounted for 23.0 per cent of total deposits from 19.5 percent in the 2016 financial year.

All regulatory ratios were above the required thresholds with Capital Adequacy Ratio (CAR) at 16.5 per cent and Liquidity Ratio at 35.9 per cent. Non-Performing Loans ratio (NPL) improved marginally to 6.5 per cent from 6.6 per cent. This was in spite of a 5.4 per cent growth in the absolute NPL numbers, 2017FY coverage ratio (including regulatory risk reserves) improved to 106.4 per cent compared to 83.0 per cent in 2016.

While addressing shareholders at the Annual General Meeting (AGM) recently, the bank chairman, Mr. Ernest Ebi, said Fidelity Bank was strategically poised to successfully navigate the business environment in 2018. Ebi expressed optimism that the expected improvements in the global landscape would trickle down to the domestic economy to consolidate the comforting business climate witnessed towards the end of 2017.

In their reactions, elated shareholders who spoke against the backdrop of the bank’s FY2017, which saw profits rise by nearly 100 per cent, commended the board, management and staff, acknowledging the strides the bank had made in strengthening its corporate governance policies and deepening its retail play with technology.

Dr. Faruk Umar, President of Association for the Advancement of the Rights of Nigerian Shareholders, lauded the bank for declaring dividend of 11 kobo per share. He said this was very delightful coming at a time when a number of other institutions are unable to pay dividends.

On his part, Moses Ogundeji, a member of Independent Shareholders Association of Nigeria (ISAN), pointed out that shareholders appreciated the efforts of the board and management in the transformation of the bank and assured of the continued support of shareholders.

Since Okonkwo’s assumption of office as the Chief Executive, Fidelity Bank has been on the upswing; customer accounts have grown from 2.3million to 3.9million, savings deposits rose from N83.3billion to N178.6billion, while internet/ mobile banking customers have risen to 1.382million in just three years.

Okonkwo attributes the rising profile of the bank to its conservativeness, its people, its disciplined pursuit of agreed vision, its international best practices and its great products.

According to him, “At some point people thought Fidelity Bank was too conservative but it was for good reason. It has enabled us to survive three or four cycles of crisis in the banking industry with us acquiring two banks in the process. When I came on board, it was clear to me that we needed to be mindful of these and management also agreed to retain this posture.”

On disciplined pursuit of shared vision, the MD said, “When we had our strategic retreat to strategize for the next growth phase. We said to ourselves at the retreat that we want to be the clear leader among tier-two banks. So, we crafted the medium-term strategic initiatives built around balance sheet optimization, cost reduction, and increased digitization. We were sure that if we remained focused on the implementation of these initiatives, we would achieve success. Four years down the line, we like the results we have achieved even though we also realize that we are not yet where we intend to go ultimately.”

While assuring the shareholders that the 2017 financial year’s performance was not a fluke, the Managing Director stressed that the management and staff were poised to post a better result in the 2018 financial year.

He said, “We are aware of the growing opportunities in our markets. We will continue to focus on redesigning our systems and processes to enhance service delivery, deepen our cost optimization initiatives to reduce operating expenses and cost-to-serve, and enhance our overall risk monitoring capacities to ensure both internal and external risks are identified and mitigated before they crystalize.

“Anchored on the evolving dynamics in the industry, we will continue to increase the adoption and migration of customers to our digital platforms and increase our retail banking market share through innovative products and services. We will enhance our robust electronic banking processes and products thereby deepening our hold on the retail and commercial markets, Small and Medium Scale Enterprises (SME) and niche corporate clientele.”

With Nnamdi Okonkwo in the saddle at Fidelity Bank, there is no doubt that the bank is set for new heights.

Does government care about us?