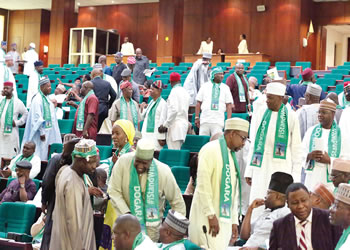 The House of Representatives is to hold a public hearing on the 2017 appropriation bill to allow stakeholders and members of the public make inputs into the proposed legislation before it would be passed.

Chairman of the House committee on Media and Public Affairs, Hon. Abdulrazaq Namdas revealed this to news men in Abuja yesterday.

Hon. Namdas said that based on this the House has suspended plenary till February 21, to enable the appropriation committee and other standing committees work on the proposed budget, which was passed through second reading yesterday.

He explained that during the three weeks of suspension of plenary, members of the House would still be working at the committee stage.

According to him, “we are not on recess but only plenary has been suspended until February 21,  to enable various committees attend to the budget”

“This will be the first time in the history of the present National Assembly that a proposed budget will be subjected to a public debate to allow for inputs from the Public”.

Speaker Yakubu Dogara, had announced the suspension of plenary after closure of debate on the budget and charged the committees to be diligent and work assiduously towards producing an implementable budget.

Recalled that Dogara had in his address to welcome his colleagues from the Christmas and New Year break promised reforms in the budget processes by making it transparent.

Buhari not in London hospital – Presidency

2 die, many injured as gas tank explodes in Ogun