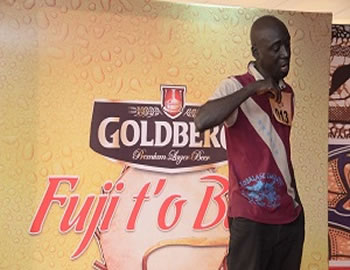 Goldberg the lager Beer, a product from the stable of Nigerian Breweries Plc, has deepened its support for the culture and tradition of the Yoruba people living in the western part of Nigeria. The brand gathered the lovers and enthusiasts of Fuji music at the first of its kind Fuji Roundtable, a forum organised for intellectual discussions on how to take the genre of music to the next level.

Goldberg first threw its weight behind the socio-cultural life of the Yorubas living in the South-West and beyond four years ago when it inaugurated the talent hunt scheme for promising Fuji musicians, Fuji t’o Bam.

His words: “As part of our efforts towards community development anywhere we operate, Goldberg, in 2012, inaugurated its initiative of Fuji t’o Bam. We respect people’s cultures and values. Our gathering here today is a testament of our resolute determination to contribute to the socio-cultural development of the people in the western part of our nation.”

In his keynote address at the Fuji Roundtable, Olawale Obadeyi, a Fuji analyst, traced the origin of this genre of music to the period when Were, the local brand of music was in vogue among the Muslim faithful. He acknowledged that the music has grown astronomically over the years featuring different artistes who have contributed in different dimensions to its development.

He said the innovations brought in Fuji by these artistes have deepened ties across boundaries in the region. “Each Fuji artiste, evidently, is pushing the limits of creativity. The horizon of Fuji music has been astoundingly widened”, he stated.

Obadeyi identified Fuji music as a unifying force that easily bonds Yoruba together. His words: “Goldberg had appropriated Fuji music as a veritable platform through which cultural values could be used to validate the essence of Yoruba living in the region and beyond.”

Sikiru Ayinde Agboola (a.k.a SK Sensation), Chairman, National Project Committee of the Fuji Musicians Association of Nigeria, who corroborated him, advised Fuji musicians and other stakeholders in the country to take the music to the next level. According to him, it is the only surviving genre of music that has its origin in Nigeria and deserves concerted efforts by stakeholders to proffer possible ways through which it could be developed. His words: “It is the duty of all stakeholders to take the music to the next level.”

He therefore, commended Goldberg Lager Beer for the support it gives to the music. Agboola said the support by Goldberg is second to none and should be emulated by other companies in the country.

In his opening remarks at the programme, Emmanuel Agu, Portfolio Manager, Mainstream Lager and Stout brands, Nigerian Breweries Plc; said the importance of music to any country cannot be over-emphasised. According to him, the role of music in nation building is monumental as it fuels the mind and the creativity of listeners.

His words: “Music transcends all boundaries of communication. Music and its rhythm define our humanity considering the universality and essentiality beyond language barrier. I believe it is important for one to have an open mind in order to be in touch with that sense of understanding. Music cannot be separated from our socio-cultural life and as such it is a social connector which has the power to suggest circumstances, moods, and moments. It has general appeal to human senses.”

Giving the rationale for the event, the Portfolio Manager said the company always strives to champion, promote and associate with the culture of its host communities. His words: “This is what Goldberg has been doing with its initiative of Fuji t’o Bam since 2012 when it inaugurated the concept. We respect people’s cultures and values.”

He stated that the Goldberg Fuji t’o Bam initiative has successfully brought to life the twin socio-cultural tradition of companionship and celebration. “The initiative readily identifies and celebrates the rich musical tradition of sustaining the cultural values of the people in the region.

The indigenous musical platform, which is currently in its fourth edition, had in the last three editions led to the discovery of budding Fuji talents and artists. “I have strong conviction that our gathering here today would in no small way help in contributing ideas to the development of the Fuji music and the culture of the Yoruba people,” he stated.

Why I feature tourism issues on TALOGAJU —Ajibade