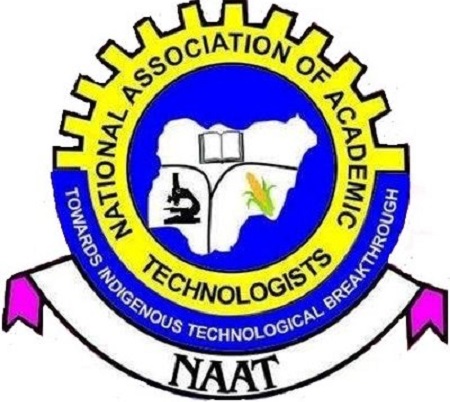 The National Association of Academic Technologists (NAAT) has disclosed that its members across the federation are being owed the sum of N71 billion by the government.

This, according to the President of NAAT, Comrade Ibeji Nkokoma, is in arrears as part of the 2009 agreement signed between NAAT and the Federal Government.

Nkokoma, who gave the position of the Union after the 44th National Executive Council (NEC) meeting of NAAT, demanded that the sum of N100 billion be made available immediately and N5 billion annually for the next five years to equip laboratories, workshops and studios in the nation’s universities.

He pointed out that this was imperative to bring them to international standard in the interest of students, production of quality graduates and national development.

On the issue of earned allowance, Nkokoma said the Union would resist any attempt where the sharing of the recently approved N40 billion earned allowance released by the Federal Government is skewed to favour a particular union to the detriment of its members.

The NAAT president also slammed the Chairman of the Federal Government Renegotiation Committee, Prof. Munzali Jibrin, over its comments on the sharing of the earned allowance, saying that the former Executive Secretary of National Universities Commission has made himself the mouth piece of ASUU.

He said: “This is the same person appointed to head the Government Renegotiation Team. NAAT is highly disappointed in the person of Prof. Munzali Jibrin for all the comments and sympathy expressed for ASUU. This has clearly indicated that NAAT would not get justice and fair play with Prof. Munzali Jubrin being the Chairman.

“NAAT, therefore, call on Prof. Munzali Jibrin to retract his statements and tender an unreserved apology to NAAT and excuse himself from presiding over the renegotiation with NAAT as we do not have confidence in him.”

According to him, members of NAAT (technologists) are trained professionally to impart practical knowledge but regretted that as the right atmosphere is not provided, it becomes difficult for technologists to perform their duties properly.

He, therefore, called for immediate auditing of equipment in the University Laboratories, stressing that the need to carry out equipment audit in the universities cannot be overstressed.

On the Integrated Payroll System (IPPIS), he said the Office of the Accountant General of the Federation (OAGF) organized series of meetings to educate unions on the workings of the IPPIS where the consultant, Infinix demonstrated and produced copies of pay slips in which all allowances were said to have been captured with assurances that NAAT peculiarities would be taken care of.

Unfortunately, the NAAT president regretted that this was not the case as all their allowances contained in the 2009 FGN/NAAT agreement were removed.

He said: “We have written series of letters and had meetings on this, but up to this time; things are yet to be streamlined. NAAT recognize the fact that when a new thing is introduced, there could be some teething problems at the initial stage, but this is over seven months since the IPPIS commenced in the Universities. We are yet to see any improvement.”

How we have developed farmers over the years —JDPC