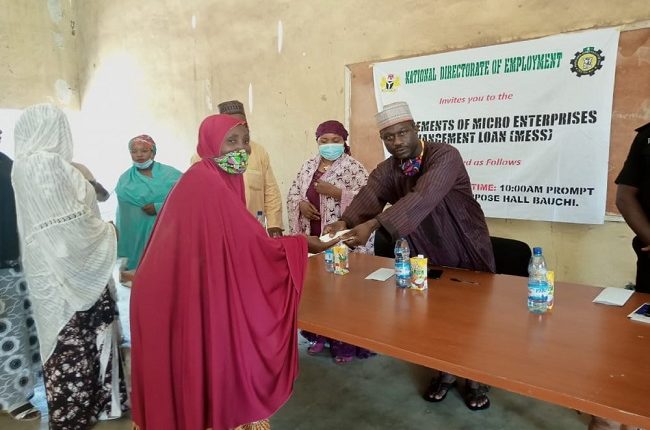 200 women drawn from the 20 LGAs in Bauchi State have received a total sum of N2 million as take-off incentives from the National Directorate of Employment (NDE), Bauchi State office after undergoing skills acquisition training to enable them to become self-employed and employers of labour.

The state chapter, on Tuesday, disbursed N2 million naira to 200 women across the 20 Local Government Areas (LGAs) of the state.

While making the disbursement of the money on Tuesday, Director General of the NDE, Mr Nasiru Argungu, said that the gesture by the NDE was aimed at assisting in boosting micro businesses of the women, thereby contributing to economic development and poverty reduction in the country generally.

Represented by Bauchi state Coordinator of the NDE, Lawan Yaya, The D-G stressed that the empowerment programme was under the Directorate’s Micro Enterprises Enhancement Scheme (MESS) disclosing that all the 200 women were drawn from each of the 20 local government areas of the state with 10 each.

The DG added that each of the beneficiaries was entitled to the sum of N10,000 as financial support to start or boost a micro business of her choice saying, “There is a scheme at the NDE, which is an innovation from the office of the Director-General, known as Micro Enterprises Enhancement Scheme (MESS)”.

He added that “It is under this scheme that we are disbursing N10,000 each to the 200 women selected from the 20 LGAs in the state, to boost their economic activities. In total, we are disbursing N2 million today, to 200 women, because it is believed that when a woman is empowered, the whole nation is equally empowered.”

Nasiru Argungu, however, advised the beneficiaries to utilise the money judiciously and put it into ventures that would bring them profit so that the business will grow to become a mega one.

While Speaking on behalf of the beneficiaries, Mrs Hauwa Jalla, commended the NDE and the Federal Government for the kind gesture, assuring that the money would be utilised for the purpose it was meant for to the admiration of the NDE.

During the training, the women were lectured in Some of the petty businesses including; selling of bean cakes (Akara), groundnut and zobo, making Talia among others which are mostly engaged in by women.

EDITORIAL: RMRDC And The Kilishi Breakthrough
PROFESSOR Hussain Ibrahim, the Director-General of the Raw Material Research and Development Council (RMRDC), caused more than a stir recently when he appeared before the Senate Committee on Science and Technology. Asked to elaborate on the core achievements of the council, he told the committee that the… Read Full Story

Let’s Kill The Politicians
Please don’t be alarmed, it’s not the end of the world yet. Truth is, we can do without them all, I mean the politicians. We don’t need them at all to survive. But then, who actually is a politician? According to the learned authors of the Merriam-Webster Dictionary, a ‘politician’ is “a person experienced in the art or science of… Read Full Story