•I decided to sleep with our housemaid ‘cos my wife denied me sex, man tells court 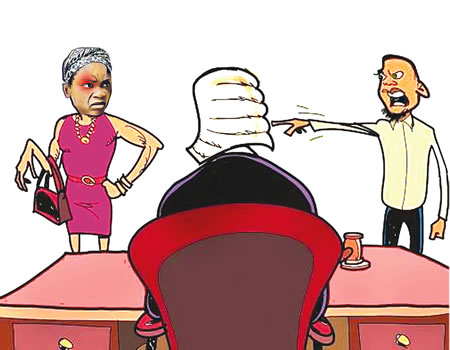 A Ndola husband shocked Kabushi Local Court in Zambia after narrating how he and his wife of 20 years took turns to cheat on each other following which he opted to have sex with a maid.

Shadreck Kalela, 35, of Twapia Township, dragged his wife Jane Chembe, 30, to court for divorce where he also revealed that his wife is now refusing to have sex with him and he has since decided to play the bedroom’s ‘hide my sausage’ game with their house maid.

Kalela told the senior presiding magistrate, Agness Mulenga, that the couple got married in 2000 and lived in peace but problems started in 2006 when he got a job as a security officer, which made him knock off late.

According to Zambia Observer, Shadreck stated that Jane took advantage of the situation and started spending most of her time at her parents’ home.

Shadreck told the court he once beat Jane for this but that she refused to change.

“Even after I beat her up, I still did not find her home. She started denying me conjugal rights. She employed a young girl as a maid when she started working at a hospital. I became familiar with the girl and one day I made a mistake and slept with her,” he said.

The plaintiff further told the court that he found his wife with another man, which infuriated him and that he beat her up.

He said the couple engaged church elders and family members in helping them resolve their differences but all proved futile.

”Since 2011 we have not lived in peace. She has no respect for me and has consistently denied me sex,” he said.

‘Our neigbours always know when we have sex, ’cos my wife yells, curses, draws knife…