•Calls for support from donor agencies, individuals across the country 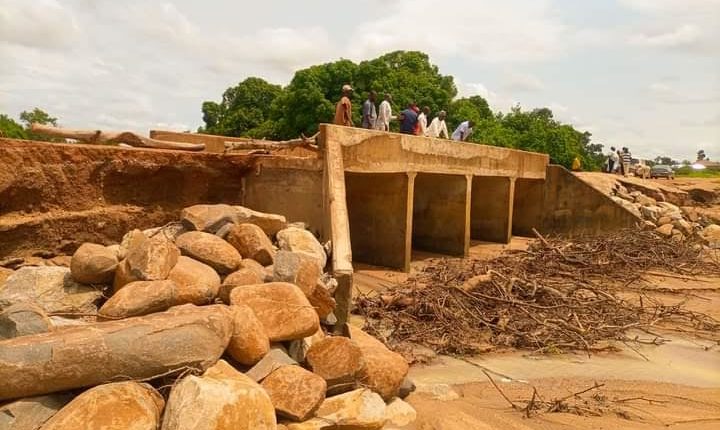 At least, 20 people have lost their lives while 37 others were injured at various levels and properties including livestock, buildings, farmlands and other items worth over N1 billion were lost to floods caused by torrential raining in Bauchi State.

The statistics was given by the Bauchi State Emergency Management Agency (SEMA) as this year’s raining season is yet to abate thereby putting lives of residents of communities in danger especially those in riverine and flood-prone areas across the state.

The Coordinator of Bauchi State Emergency Management Agency (SEMA), Dr Abubakar Umar Gabarin who gave an update on the flood situation in the state while briefing Journalists said that more deaths were recorded as all the 20 local government areas of the state were affected by serious and damaging floods so far.

Abubakar Gabarin, said that the Agency was still collating reports on floodings in parts of the state, disclosing however that 6,000 farmlands have so far been submerged, 47 culverts washed away just as 27 bridges have collapsed thereby making communication through transportation in the affected communities extremely difficult.

According to him, “We are still collating the number of casualties affected. However, we have recorded additional figures of death, we recorded additional three in Gamawa LGA, we have two in Darazo LGA and two in Duguri, Alkaleri LGA. Flood brought three dead bodies to Jama’are from a place we do not know.”

The SEMA Coordinator added that, “We recorded 37 people injured. 47 washed away culverts were washed away by the flood, 27 bridges collapsed, 6000 farmlands submerged with over 2,000 families affected and over N1 billion property lost.”

He further disclosed that the State Governor, Senator Bala Abdulkadir Mohammed, has set up a high powered committee headed by the State Deputy Governor, Senator Baba Tela, to go round the affected areas with a view to assessing, ascertaining and bringing a comprehensive report on the damages caused by floods in communities.

Abubakar Gabarin also said that setting up of the Committee followed the Governor’s visits to affected areas across the state, adding that the Senator Tela-led committee was expected to recommend to the state government how to assist victims to enable them pick up live again.

He further revealed that Governor Mohammed had sent two trucks load of maize and rice as an immediate relief measure to Kirfi Local Government Area, adding that 100 bags of rice and 100 bags of maize were sent to Giade LGA by the Governor to ameliorate the suffering of the flood victims in the area.

According to him, flood victims in Bauchi Local Government Area were given food items, blankets, cups and plates as part of efforts to assist them.

He added that the state government was making efforts to distribute emergency assistance to all affected communities in the state based on their needs, saying that as the Agency was assessing the situations, it was also receiving assistance from the government.

The SEMA Coordinator, however, expressed gratitude to the United Nations Children Funds (UNICEF); National Emergency Management Agency (NEMA) and the Presidential Committee on floods for coming to the aid of the state to assess the situation of the victims.

He then appealed to donor agencies and philanthropists across the country to complement government efforts by assisting victims.

Meanwhile, an official of the Agency informed journalists that ravaging floods wrecked havoc on all the federal  highways in the state, including Bauchi-Gombe road; Kano-Ningi road; Bauchi-Maiduguri federal highway, among others.

They added that as a result of damages caused by the massive flooding, commuters plying the roads are being forced to wait for several hours before they can continue with their journey, worst hit is Bauchi – Gombe road particularly the portion between Alkaleri and Gombe where motorists are forced to pay between N2000 and N5000 depending on the size of the vehicle to be able to cross the washed away bridge at Tashan Turmi village.

BBnaija: Angel’s father reacts to slut-shaming comments, says ‘there is nothing new under the sun’