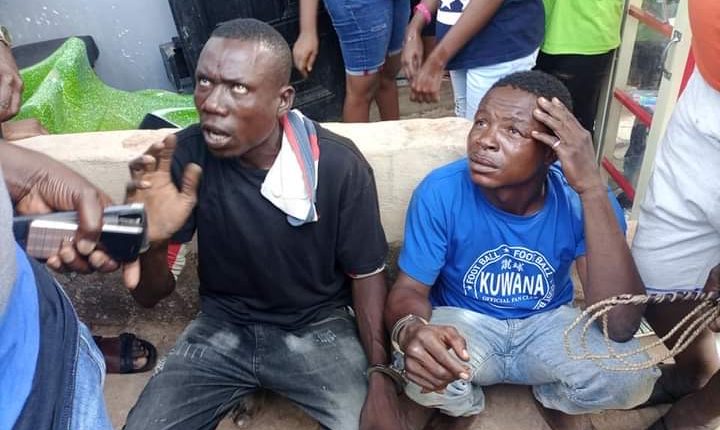 They were caught while attempting to steal the fifth phone, for the day, from a female salon store at Orikeze avenue in Agbor, Ika South Local Government Area of the state.

Tribune Online gathered Saturday morning that both suspects arrived the scene on a motorcycle pretending to want to purchase shampoo.

“He asked that I should give him shampoo, but I told him that it has finished. Later, he asked for another item and, while I turned to bring the item, he smartly picked my phone which I kept on the floor,” a source narrated.

Luck, however, ran out on the suspects who, unknown to them, were being monitored by security men that were keeping surveillance and were swiftly apprehended.

Confessing separately on their activities, the suspects, reeled out the names of places where they had earlier been that day to steal four other phones.

Operatives of the Agbor Gha-Ihun security group, led by Comrade Monday Kiyem, who paraded the suspects before handing them over to the police, warned residents to be more security conscious as yuletide approaches.

He urged store owners within Agbor and its environs to be more vigilant and always take note of strange movements of people around their stores.

Meanwhile, the Police Public Relations Officer (PPRO) of the Delta State Command, DSP Onome Onovwakpoyeya, who confirmed the arrest, urged the public to be wary of strange movements in their domain and make useful information available to security agents.

E-transmission: INEC should be left to decide, says Fayemi