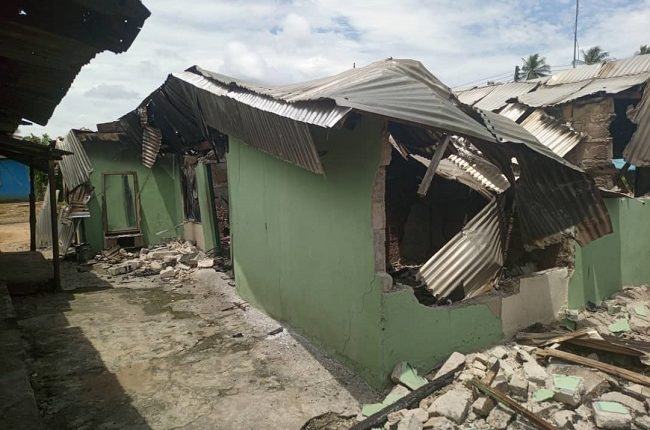 Reports say President-General of Evwreni Clan Improvement Union, Victor Ohare, and a yet-to-be-identified soldier was among those allegedly shot in the renewed crisis reportedly caused by the alleged death of the chairman of the vigilance’s group, Mr Tuesday Okuah, in police custody in Abuja.

Besides the three houses, a car belonging to a leader in the community was reportedly burnt while some shops were also vandalised.

There have been reports of heightened tension in the community following the dispute that has trailed the leadership of the community vigilance outfit which had already claimed about three lives with many properties destroyed.

According to a source, boys loyal to the former vigilance group chairman who allegedly committed suicide while in police detention in Abuja carried out the attacks.

“As soon as news filtered into the town that Mr Tuesday Okuah committed suicide while in detention, his boys went on the rampage, shooting sporadically and in the process, one Hon. Victor Ohare was shot and he is in critical condition.

“Not done, they proceeded to set on fire the house of Prince Matthew Uba. The house of the Odion-Esiri of Evwreni and his car were also set ablaze, while the car of  Wilfred Otuedor and the shop of Nathan Oruemu were destroyed.

“They equally attempted to burn down the house of a former director of projects of the Niger Delta Development Commission (NDDC), Chief Samuel Adjogbe but were repelled by the mobile policemen stationed at the compound who exchanged gunshots with the arsonists.

“Late into Saturday evening, we also heard that one of the soldiers that were drafted to restore peace to the community was shot by the rampaging disbanded vigilance boys when the soldiers were ambushed on their way into the community. The soldier was rushed to an undisclosed hospital.

“As we speak, people are fleeing the community and the boys are going about shooting sporadically unchallenged, and with the look of things, if nothing is done urgently, more lives will be lost,” the source disclosed on Sunday.

It will be recalled that the allegedly deceased Mr Okuah, the traditional monarch of the community, HRM Oghenekwevwe Kumane and six others namely: Hon Sam Mariere, K. K. Kumane, James Asakpa, Ochuko Kumane, Kelly Omojugheri and Stephen Atiri, were reportedly invited to Asaba by the IGP team for investigation relating to the murder of one Mr Sylvester Adjogbe, a relative of Mr Sam Adjogbe.

However, the king and Hon Mariere were released on bail, while late Okuah and three others were taken to Abuja and in custody, Mr Okuah reportedly committed suicide on the allegation of refusing to cooperate with police’s investigation.

Meanwhile, the Delta State Commissioner of Police, Mr Hafiz Inuwa, when contacted said the state command was not aware of the incident.

“I’m in Delta; I do not know what is happening in Abuja. I am just hearing it from you now because we were not informed. If we are not the ones investigating the matter, I won’t know. As far as our command is concerned, we are not aware of it,” he said when contacted.

Several calls and messages sent to the officer in charge of the IGP Monitoring Team, ACP Adamu Abdullahi Elleman,  were also not responded to.

However, the Force Police Public Relations Officer (FPRO), Frank Mba, when contacted promised to furnish details on the incident to journalists in due time.