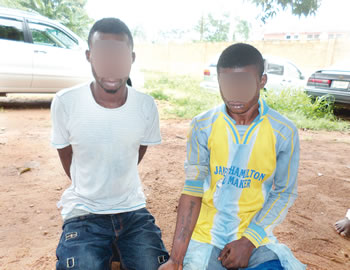 Two friends who allegedly conspired to steal a tricycle valued at N350,000 were on Friday docked before an Ikeja Chief Magistrates’ Court in Lagos.

The accused were: Ifesinachi Omaka, an 18-yearold baker, who lives at 4, Ogun River Road, Isheri, Lagos and Victor Bassey (20), a mechanic, of No. 22, Victory Estate, Akure, Ogun State.

They faced a two-count charge of conspiracy and stealing.

The prosecutor, Sgt. Donjor Perezi, told the court that the offences were committed on June 13 at Isheri- Magodo road, Lagos.

Perezi said that the accused took the tricycle where it was parked and were heading to Mushin, a suburb of Lagos, to sell it.

“The Police arrested them on the way because they followed a prohibited route.

“It was at the Police Station they confessed to stealing the tricycle,’’ he said.

Perezi said that the tricycle, valued at N350,000 belonged to Mr Adewale Adebowale.

The offences contravened Sections 285 and 409 of the Criminal Law of Lagos State, 2011.

The duo pleaded not guilty to the charge preferred against them.

The Chief Magistrate, Mrs O.A Layinka, admitted the accused to bail in the sum of N200,000 each, with two sureties in like sum.

She adjourned the case to July 26, for mention.