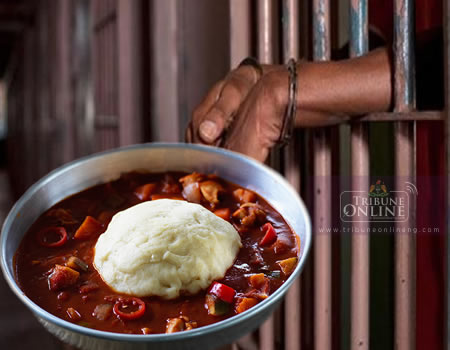 An Ikorodu Magistrates’ Court in Lagos State on Thursday remanded two siblings in prison for stealing some loaves of bread, hot drinks, and pounded cassava (fufu).

The Magistrate, Mr O.O.Olatunji, ordered that they be remanded in prison for 30 days, pending the outcome of advice from the Office of the Director of Public Prosecutions (DPP).

The duo, Augustine Uwaifo (30), and his younger brother, Philip Uwaifo (29), of Odonguyan Community in Ikorodu, pleaded not guilty to a two-count charge of conspiracy and stealing preferred against them.

The Prosecutor, Sgt. Bosede Adegeshin, said the duo committed the offences on June 29 at 10:00 p.m. at some shops located far away from their home.

“The accused armed themselves with a cutlass and an axe to dispossess traders of their goods at their shops located at New Industrial Road, Losi Community in Odonguyan.

“They robbed one Mrs Vivian John of loaves of bread and some packs of soft and alcoholic drinks worth N10, 000.

“In that same area on the same date, the duo also robbed Rose Breff of N3, 000 worth of pounded cassava (Fufu).

“The accused thought they had succeeded in the operation but people in the community apprehended them,’’ she said.

Adegeshin said the offences contravened Sections 285 and 299(b) of the Criminal Code, Laws of Lagos State, 2015.

The News Agency of Nigeria (NAN) reports that the Section 285 prescribes a three-year prison term for convicted offenders..