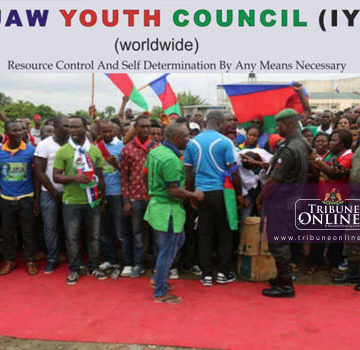 THE Ijaw Youths Council (IYC) has called on President Muhammadu Buhari to immediately approve the needed funds for the implementation of the Niger Delta development master plan as it has done Boko Haram insurgency.

President of IYC worldwide, Pereotubo Oweilaemi, Esq., made the call in a statement on Saturday, following the unilateral approval of $1billion to fight Boko Haram which the Federal Government had earlier told the world had been decimated and defeated.

He warned of a possible reopening of old wounds and resurgence of youth restiveness in the region if the request, which he described as “one of the cardinal conditions for peace in the region” is not looked into.

Oweilaemi disclosed that something is fishy as regards the manner with which the president approved the huge money without a recourse to the National Assembly, asking him to justify his action.

“The unilateral approval of $1b by President Mohammadu Buhari to combat Boko Haram without recourse to legislative approval means that the government can also unilaterally approved money for the Niger Delta developmental plan.

“If the executive arm can on its own volition approve such amount of money to prosecute the much-touted defeated Boko Haram sects, then we see no reason why Niger Delta region should not get a lion share of the slush funds.

“There is no justification for the release of such funds to combat Boko Haram sects who the Government has declared being defeated.

“Though no sacrifice is too much in securing lives and property in the Country, our concern is the use of one billion dollars to fight the terrorists the FG has once celebrated to have been defeated.

“Is there anything that the FG is not telling Nigerians? IYC smells a rat in this shoddy plan to spend the taxpayers’ money on this fruitless venture.

“To us in the Niger Delta region, the money said to be approved by the President for the Boko Haram crisis is a smokescreen. There is more to it than meet the ordinary eyes.

“President Buhari should use the money to address other critical sectors in the Country. In the Niger Delta, we have several projects littered in the region that are begging for the Government’s attention.

“The growing silence on the part of the FG constitutes more threats to peace in this Country. The Ogoni clean-up exercise is still a mirage; the Escravos Gas City project has been tactically abandoned by this government. The FG is owing NDDC billions of naira.

“The Government can revive the moribund deep sea ports and dockyards in Burutu and other coastal towns in the region. The coastal highway road project awarded by the Yar’Adua Government needs $1b for its take off.

“The East-West Road is still begging for completion. These are projects that will not only generate income to the government, they will also guarantee peace in the region thereby boosting the economy,” the IYC president enthused.

Oweilaemi concluded that “approving money to fight some defeated terrorists, while leaving the region that required such money more than any other sector did not only leave one in doubt, but it will also open the old wounds of restiveness in the Niger Delta.”