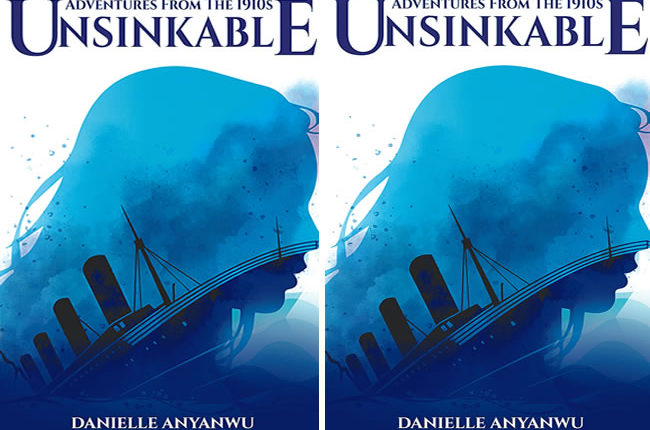 A review of 12-year-old Danielle Anyanwu’s book, Adventures from the 1910s: Unsinkable, By Opeyemi Ayomide Oyenekan

One of the major events of the 1910s most people cannot forget is the sinking of the Royal Mail Ship (RMS) ‘Titanic’ in 1912. Then, in 1997, James Cameron, gave us the box-office movie ‘Titanic’, which is still relatively fresh in our minds. Interestingly, the freshest narrative of the Titanic saga is from a young writer who was not even born in the 20th century.

The book, Adventures from the 1910s – Unsinkable’ written by 12-year-old Danielle Anyanwu and published by Faunteewrites Books, London, is a 48-chapter, 120-page novel that brings another vibe and perspective to the Titanic story.

The story simple begins on 10th of April, 1912, a day many people, just like the Norflook family, are anticipating to board the newly launched ‘Titanic’ ship.

The Norflooks  — a family of four from London — are relocating to America to have a better life and to also give their two children, James (15) and Isabella (nine), a better future. However, Isabella is not interested in the trip. She is reluctant to embarking on the journey because she does not want to leave her best friend, Anastasia, behind.

But, as luck will have it, the two friends later meet in the ship, and are happy for the reunion. The Norfolks meet the Mantoos’ and the Andersons’ families and befriend them. Mr and Mrs Mantoo have three daughters, but only two are always with them. The other, their first daughter, Alice (19), volunteers as a maid in the ship, and fortunately, she works in the first-class suite of the Norflooks.

Most times, when the Norflooks and the Mantoos meet to dine, instead of it being a peaceful and a fun dinner, it ends up getting ruined, with the opposite sides bickering or attacking one another. On the other hand, James meets Alice and is attracted to her, but it does seem like a one-sided attraction.

One day, Isabella has a dream of the ship sinking. Few days later, Maggie and Jasper — younger cousins of Anastasia and children of Mr and Mrs Anderson — go missing. The cousins lost their way from their first-class deck to third-class deck, and are surprised to see people sleeping on bunk beds. They later drift deeper into the ship to the engine room, where they are apprehended by some crewmen who cajole them to work with them till they get to America as punishment for straying.

Hours later, water starts getting in the ship from the bottom where Maggie and Jasper are held hostage. The ‘unsinkable’ ship is sinking. Within minutes, people are running amok, looking for their families. Some people, especially women and children, must be saved through the limited lifeboats available. Unfortunately, however, some wealthy men, like Mrs Mantoo and Anderson, find their ways in to the boats. Those that cannot make the boats sprint for places to anchor themselves as they prepare for their deaths.

Fortunately, Mrs Norflook, Isabella, Anastasia, the Mantoos and the Andersons, make it to the boats. Mr Norflook and James do not make it. Amid the commotion and fear, the ship sinks and many people die. After some hours, a rescue ship comes and some of the people that sink with the ship — including Mr Norflook, James, and another friend of Isabella, Dixie, whom they do not know is on-board the ship — are rescued.

When I first set my eyes on the title of this book, and after reading it, my mind travelled down the ‘Titanic’ era, and the daring line from the ‘Titanic’ movie: “It’s unsinkable. Even God Himself couldn’t sink this ship.” This is what this book does to you. It is a reminder that history, good or bad, does not forget.

It is surprising, yet amassing, how the young author is able, with significant accuracy, to trace the itinerary of the ship from its departure point to the point it sinks.

A photography artist’s experience of the metaphysical in football

No Nigerian writer on shortlist for 2021 AKO Caine Prize

Why I quit being a member of ANA —B.M. Dzukogi

Learning from the experience of an intern