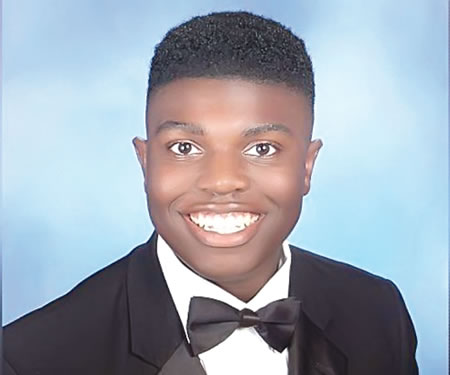 Even during a global crisis, one high school senior is making history on two fronts.

Timi Adelakun has become the first black valedictorian of South Broward High School in Hollywood, Florida, and has the highest GPA ever recorded at the school.

“Coming from a low-income community, it means a lot in general because of the way I was brought up,” Adelakun told ABC News.

The 18-year-old, who has a 5.604 Grade Point Average (GPA), said that although he was surprised to discover the news, school officials alerted him of his potentially history-making grades long before his senior year. He also jokingly admits that when he graduates, it will most likely be slightly higher.

Adelakun, whose parents are from Nigeria, is the youngest of three children and neither of his parents attended college.

He said that his major accomplishment is somewhat bittersweet considering his father — who was deported over a decade ago — won’t be there to help celebrate the big moment.

“He’s missed out and it’s not his fault. It’s not any of our fault,” Adelakun said.

His father lived in the U.S. for roughly 28 years after coming to the country as a student in 1981. Adelakun says his family is still fighting to bring him back to the country.

“He left when I was in the first grade. … I miss his physical presence and involvement,” Adelakun said.

From helping to fund some of his educational resources with side hustles, such as graphic design and photography, or walking to school if he missed the bus, he said that this milestone is definitely something he worked hard at.

He has served as the district representative for the school’s award-winning theater competition and the vice president for physics club.

Adelakun will deliver a speech during South Broward High School’s virtual ceremony in June, but he hasn’t narrowed down his exact remarks.

He said he plans to provide “some positive reinforcement” for the class of 2020 in the wake of the coronavirus pandemic.

Adelakun is headed to Pomona College, a private liberal arts college in Claremont, California, which he says not only offered him a full scholarship, but also checks all the boxes he’s looking for in an overall college experience.

He was accepted to nearly a dozen colleges, including Columbia University, the Juilliard School and the University of Southern California.