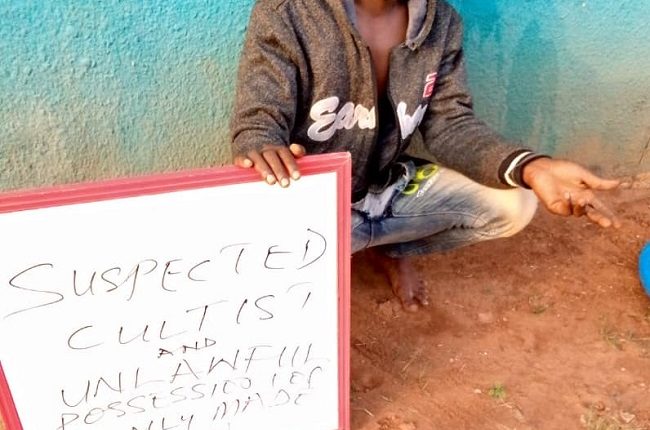 A 16-year-old boy, Obi Ebie and six others have been arrested for stealing a Tecno Camon 15 phone valued at N63, 000,  possession of firearms and other offences.

The suspects were apprehended at various points by operatives of the Delta State Police Command between March 3 and Thursday 11, 2021.

It was gathered that following a report of stealing of mobile phones by hoodlums using tricycles and motorcycles in Asaba and other parts of the state, the Commissioner of Police, Delta State, CP Ari Muhammed Ali, directed a clampdown on the syndicate.

The directive led to the apprehension of Obi on March 3 by police operatives from A Division, Asaba, who, after a tip-off from a victim, intercepted the culprit while fleeing with the Tecno Camon 15 phone on his motorcycle along Nnebisi Road, Asaba.

Two suspected male tricycle thieves, Kossisor Chukwu and Nwete Sunday were, on March 6, arrested by ‘A’ Division, Asaba operatives led by CSP Fasugba Temitope with a stolen tricycle with Reg. No. BBG 848 QV in Anambra State, which was earlier allegedly stolen from where it was parked in Asaba by one Olinya Ernest.

In other operations, three suspects, Udensi David of Udumuje-Ugboko, Chukwuemeka Onyeogbeyesoi of Agbor-Obi and Festus Onuelue were caught at various points with arms and ammunition.

A distress call from an indigene of Udumuje-Ugboko reportedly led to the arrest of Udensi with the recovery of a double-barrel gun and a live cartridge by police operatives Issele-Uku Division on March 8.

It was gathered that Onuelue, also known as Supper, was, on March 9, nabbed by operatives of Delta Safe patrol team along General Hospital road by Owa-Alero with one cut-to-size locally-made pistol, three live cartridges, while Chukwuemeka of Agbor-Obi was arrested on March 11 at Ikem Hotel by a team of Agbor Police Divisional patrol team and local vigilante with one locally-made short gun, two cartridges.

The surprise visit made on Friday night by the leaders of the ruling All Progressives Congress (APC) to former President Goodluck Jonathan at his residence in Abuja triggered a stir in the major political camps, resulting in at least four possible theories…16-year-old phone thief  16-year-old phone thief