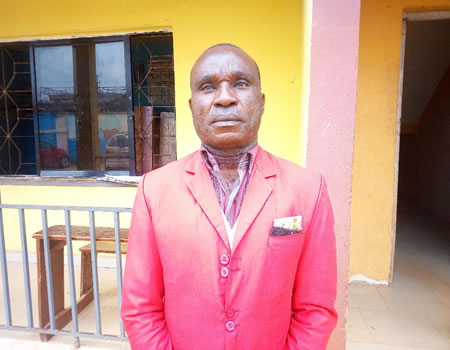 Pastor Olisadebelum Onuoha is the founder of Jehovah’s World Ministerial Outreach (aka) The End of All Ministries based in Enugu. In this interview with ALPHONSUS AGBORH, he gives his prophesies on Nigeria, controversy over Biafra agitation, Igbo presidency and the 15 cabals, who are out to destroy Nigeria.

End time of the world

With the proliferation of churches and the rushing cases of anti-Christ agents masquerading as God-sent prophets, it is very important that we rush slowly to target all ministers as fake so that we do not run the avoidable risk of missing true messages when they come through genuine God’s servants.Three men entered this earth in 1964 for the end-time work. Two of them are the later-day Moses and Elijah. The present-day Moses is in Israel, while Elijah the prophet is in the eastern part of Nigeria.The third person, the anti-Christ as revealed in revelation 13:11 to the end, is in America.In the midst of the Jewish children in the East of Nigeria is Elijah the prophet and I am the present-day Elijah with the divine assignment.

The realisation of Biafra now

The all-knowing God has asked me to tell the agitators for the Republic of Biafra that it is not yet time. God said the Igbo Nation is a must but one that, it is to be established by Him alone or it will be like a place trodden under foot. He warned that not even the support of the United Nations will make that dream a reality without His involvement.Thus said the Lord: the realisation of the Biafra nation is fast approaching but are the Igbos ready for the outcome? In order words, how prepared are they to protect and manage the affairs of the dream nation, God said I should tell Biafra agitators that they will soon hear a word that will make them happy and celebrate: but they should not mistake that word for a referendum or independence. God said a referendum will come at his appointed time. Make no mistake about it, that nation must emerge but not now because God have time for everything. Those agitating for the State of Biafra should seek God first because the land of Jerusalem that was handed over to Israel with the backing of America’s President Trump is yet to enjoy genuine peace. So, our Biafran brothers are advised to welcome Jehovah into their struggle and the world for His end-time work. Also, the closer the emergence of the State of Biafra, the nearer the Third World War which is a must.

The supremacy war between the Independent People of Biafra (IPOB) and the Ohanaeze Ndigbo and the Movement for the Survival of the State of Biafra (MASSOB) is not necessary; God advises them to come together as one because a house divided against itself cannot stand.At this stage, it is necessary to announce to all that God declared name for the proposed Igbo Nation is ABIA not Biafra. Our Biafra brothers called ChukwuAbiama every day. This is God’s name meaning “God is good”. The name ABIA means “Jehovah our father.” It is therefore necessary that all should hands off and see God move to fulfill that their dream.

Satan told me on January 17, 1995 that he would deal with the Igbo for them to know who to pray against; but due to my apathy to the threat, God was angry and reminded me that the Igbo are physical children of Judah and that He sent me in their midst as a high priest over them. The past and present leader of this country, particularly Ibrahim Babangida, OlusegunObasanjo and incumbent President MuhammaduBuhari are not the enemies of the Igbo and the agitators.

Darkness pervading on the nation as a result of wickedness and we are not moving forward?

Already, 15 prominent Nigerians, who have been spiritually identified as the cabals holding the country down in a demonic bondage and in deep corruption must die before Nigeria can make it to the guild of truly prosperous and great nation. In this imminent heavenly spiritual resolution, God is no respecter of persons. The rod of the wicked shall fall upon the wicked. Everyone will account for his deed. The agents of darkness behind our avoidable problems, including mindless looting of our common wealth, wanton killings and the raging crises in the political scene, as well as other violent crime shall be destroyed by the divine waster.

God has since revealed to me that the emergence of an elected president of Igbo origin is not now; not until after 2029 at God’s appointed time. Former governor of Enugu State, who left office not too long ago shall be the first Igbo elected president of this nation. Although a former leader of All Progressives Grand Alliance (APGA) will stoutly oppose his candidature, the word concerning the emergence has been settled. In the interim, the Igbos particularly their politicians should put their house in order before it is too late and they should stop blaming others for their persistent political misfortune.

Our choice for the rally is Enugu because Governor Ifeanyi Ugwuani once described the state as being in the hands of God. The Lord directed it must be held before the elections because He wants to deal with agents of corruptions and rigging of elections.

A dinner by the Mediterranean