15 Chinese medical experts are with us, they’ll go back soon, says CCECC MD 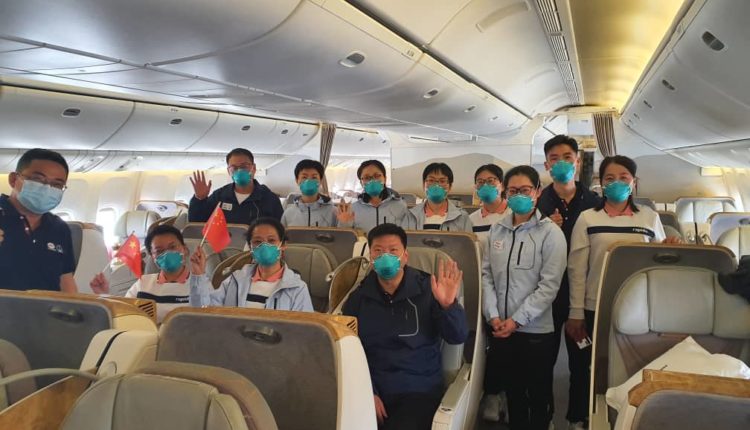 Yigao made the disclosure on Monday in Abuja while reacting to questions raised by the media and opposition parties on May 14 as to the whereabouts of the Chinese medical team.

This followed comment by the Minister of Health, Osagie Ehanire, that the experts, who reportedly came into Nigeria to support the fight against COVID-19, were not his guests but those of CCECC.

Ehanire, while responding to questions at the daily Presidential Task Force on COVID-19 briefing May 14, said “the medical personnel are not guests of the Federal Government but that of the construction company.”

Yigao, who corroborated this while speaking with newsmen, confirmed that the experts came into the country to share their experiences in fighting the COVID-19.

Yigao clarified that the team came specially to help CCECC fight this pandemic and protect its employees.

“The team had a telecast meeting with the Minister of Health and some doctors around the country and shared their experience in China on how they’re fighting the virus and the meeting was very positive.

“They are here with us and have continued to teach our staff how to protect themselves because protection and prevention are more important than the treatment.

“Most of the workers understand the situation now and they know the risk, so they follow the proper procedures and cooperate with their instructors,” he said.

He said the medical experts would be heading home as soon as there was a commercial flight to China.

“Right now, commercial flight to China is not open, but when flights are open again, we’re considering the team going back to China.”

He praised the Nigerian government for how they had been able to contain the pandemic so far.

“In a big country like Nigeria, it can be a bit difficult to control a pandemic because you will have to make all the people of such a large country understand that it is serious and real thing.

“I think Nigeria is taking this very seriously and you can see it in the implementation of the lockdown and the suspension of international flights etc.

“And like other companies in Nigeria, we will do whatever we can to help the country, like building treatment centres and training people on how to handle the virus.”

We have delivered on water supply, says Kwara commissioner