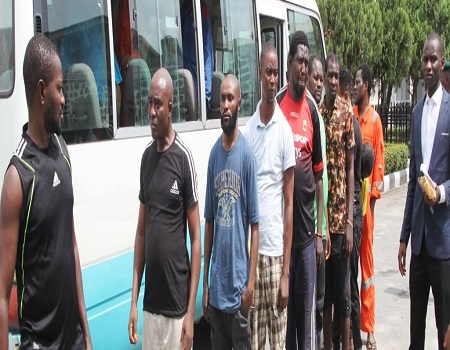 Justice Rilwan Aikawa of a Federal High Court sitting in Ikoyi, Lagos, has sentenced another 11 oil thieves to three years imprisonment each and each of them is also to pay a fine of N600,000 alongside forfeiture of their vessel to the government.

Justice Aikawa found them guilty on all three counts preferred against them by the Economic and Financial Crimes Commission (EFCC) and sentenced each of them to one-year imprisonment on each count. The sentence is to take effect from their day of arrest.

The judge also ordered the forfeiture of a vessel, MT Jonko, laden with 450 metric tonnes of crude oil to the Federal Government of Nigeria while he also imposed a fine of N600,000 on each of the convicts.

They were first arraigned on three counts of illegal oil dealing on March 4, 2020, and they pleaded not guilty to the charge.

However, at Thursday’s sitting, the defence counsel, O.J Aruwayo, informed the court that his clients will like to change their plea. The charge was read to them and they all pleaded guilty.

In view of their plea, the prosecution counsel, Bilkisu Buhari, called a witness to review the facts of the case before the court.

Led in evidence by the prosecution counsel, Moses Awolusi, an operative with the EFCC, told the court that on the 24th of December 2019, the commission received a letter of notification from the Nigerian Navy, NNS Beecroft notifying them of the arrest of 11 oil thieves and a vessel, MT Jonko. He said that they were arrested on December 12, 2019, with 450 metric tonnes of crude oil on board the vessel.

Moses also told the court that on the 3rd of January, 2020, his team proceeded to the vessel with officials of Department of Petroleum Resources (DPR) and some naval personnel to take samples of the products on the vessel in the presence of the convicts and same was forwarded to the laboratory for analysis.

He then told the court that letters of investigation activities were sent to the DPR and Nigeria Maritime Administration and Safety Agency (NIMASA) to ascertain if the vessel had a license to deal in petroleum products and if they had a permit to sail on Nigerian waters and responses were received.

Awolusi revealed that the responses showed that the convicts did not have a license to deal in petroleum products.