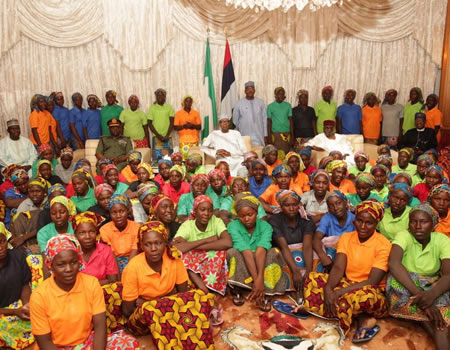 The 106 Chibok school girls who were released by the Boko Haram terrorists have received scholarships into the American University of Nigeria (AUN). The scholarship is sponsored by the Federal Government.

Minister of Women Affairs and Social Development made the disclosure at the send forth reception organised for the girls in Abuja on Wednesday night. She said the girls are to undergo foundational classes at the University.

According to her, the foundation course to be undertaken by the girls was equivalent to pre- degree programme offered in some universities, adding that the programme is aimed at bringing them up to standards.

The Minister said the girls will begin school in two weeks after reuniting with their parents and friends in their home town.

“The girls, who have undergone medical and psychological rehabilitation, will commence a special foundation programme at American University in Yola, Adamawa state” she said

On the fate of the remaining schoolgirls in captivity, Alhassan assured Nigerians that they would be released because negotiation was in progress.

In May, Boko haram released a second batch of 82 girls, after releasing the first batch of 21 in October 2016 – following a series of negotiations with the government.

About 113 Chibok girls are still in captivity.

Also, the Chairman of Chibok Local Government Area (LGA) Honourable Yaga Yarakawa, have said there are no Internally Displaced Persons (IDP) in Chibok, saying all those affected affected by the attacks resides in the villages.

Yarakawa also spoke at the send forth dinner. He lamented the alarming proliferation of arms and ammunition  the country, saying this shows that much still need to be achieved.

“Boko Haram is in the villages and hitting targets just like here in Abuja with issue of kidnap and armed robbery. There is militancy in Niger Delta, Bakasi boys in the creeks, OPC, farmers and herdsmen clashes and all sort of things which calls for security situation to be revived.

He condemned stories making rounds that the abduction of the school girls from the Chibok community is a political tale, emphasising that no sane person will joke with the lives of others.

He also noted that there is no Internally Displaced Persons (IDP) in Chibok, assuring that every indigene of the community resides in Chibok

“It is crazy to say that the Chibok girl’s story is a political play because human lives are involved. This is beyond politics and it is unfortunate that some people think in that way.

“There are no IDP camps in Chibok and all affected are in Chibok. The community is mixed with Christian and Muslim and the issue of it being a religious crisis should also not come up because the issue of religion is not serious in Chibok as we are mixed up and relating well.

He also appealed for the release of the remaining girls, saying; “Boko Haram members are parents, I am sure Shekau has wife and children, he should have pity on the girls and release them,” he said.

Sesay’s book on Chibok girls a misrepresentation of fact ― Presidency