1,000 people from 120 countries to attend WARP summit in South Korea 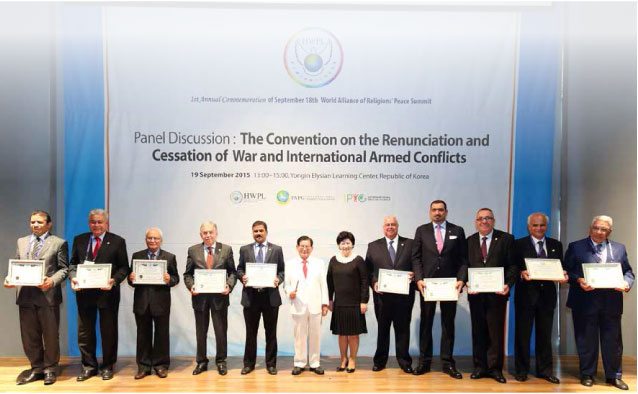 APPROXIMATELY 1,000 public figures which include world’s political and religious leaders, as well as women and youth leaders from 120 countries around the world are expected to attend the second Annual Commemoration of September 18th World Alliance of Religions’ Peace Summit” from September 17 to 19, to be hoisted by the Chairman of Heavenly Culture, World Peace, Restoration of Light (HWPL), Man Hee Lee, in Seoul, South Korea.

According to a press release from HWPL, participants at the event, include, the former President of Croatia, Ivo Josipovic; the Minister of Justice of Sri Lanka, Wijeyadasa Rajapakshe; President of the Spanish Society for International Human Rights Law, Carlos Villan Duran; the Youth Representative of The United Nations Association of New York, Juan Pablo Celis Garcia; along with various ministers, chief justices, high level government officials, and former presidents.

During the event, participants will partake in various meetings for the implementation of the Declaration of Peace and Cessation of War (DPCW).

On September 18th, “there will be an outdoor event at the Seoul Olympic Stadium. This event will mark its beginning with a parade, bringing in participants from all walks of life around the world.”

The letter further added that “the parade will be followed by a card section performance by 12,000 members of the International Peace Youth Group (IPYG) with a theme of world peace and cessation of war. This performance is expected to deliver the inspiration of peace and harmony that transcends all borders of nation, race, and religion.

“Through the 2014 WARP Summit, HWPL signed on the agreement to propose the enactment of international law for the cessation of wars and world peace.”

In September of 2015, HWPL launched the HWPL International Law Peace Committee, which consists of international law scholars, professors, and chief justices. In March of 2016, HWPL proclaimed the declaration of peace and cessation of war, along with international law experts from various countries.

Following the declaration, the “Legislate Peace” Campaign (a global advocacy movement aimed at establishing international law consistent with the DPCW) has been conducted worldwide. Since its beginning in March, 535,493 people from 167 different countries have signed their support for the DPCW.

Man who named dog ‘Buhari’ regains freedom, says no regret for his action