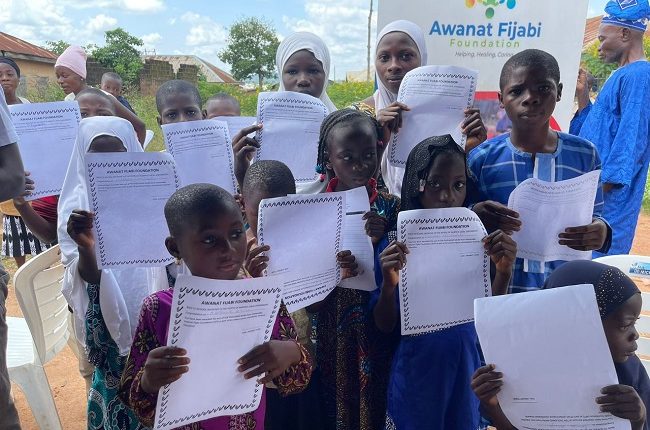 Alhaja Awanat Akinade-Fijabi has, through her Awanat Fijabi foundation, given succour to many young scholars in Akinyele Local Government Area, Ibadan, Oyo State, after offsetting the school fees of 100 students around various secondary schools in the area.

At the donation ceremony held at Oluana village, Awanat Akinade-Fijabi told the Nigerian Tribune that her passion for helping others was borne out of the need to educate as many underprivileged children in her community.

Quoting late former South African president, Nelson Mandela, who said education is the most powerful weapon which you can use to change the world, she explained that education helps a lot in shaping dreams.

She said, “Our nation needs a major change, especially our political system and if young children get the chance to get an adequate education. They are the future so I believe that they will be the ones that will give our nation needed change. I am educated with a masters degree in international business. I also just finished a post graduate diploma in occupation health and safety and environmental at the University of Middlesex, United Kingdom. My love for education and research motivates me. The Awanat Fijabi foundation has made the pledge to Akinyele Local Government Area that each school term, I will be making donations towards the children of the area. I also enjoin as many that God has empowered to replicate such in their communities.

”This is not the first time I will be involved in something like this because I know there are thousands of children whose parents cannot afford basic things in this local government area. I have thought about how to put smiles on their faces but start with 100 children. As time goes on, the number of beneficiaries will increase. I know I can’t do it alone. That is why I am urging other well-meaning individuals to join hands to assist these little ones. We are just lucky. They have found themselves in such a situation and we can’t blame God. By assisting these kids, we are fulfilling one of the tenets of the two major religions,” she added.

One of the proprietors of the schools who benefitted from the scholarship award, Mr Adegoke Gunwin of Al-Qudus secondary school, while appreciating the gesture of Alhaja Awanat, stressed that the educational sector needed a boost as such from more private individuals, in order to secure a better future for the younger generation especially the underprivileged.

“We are grateful for what she is doing in this community. A hundred families have been touched by her gesture and the relief is clearly evident” he said.

Awanat Akinade-Fijabi, through her foundation, had also, earlier this year, donated football equipment to youths around the Sasa area, also in Ibadan.

We will use constitutional powers to force Marwa, Mungono to appear before us ― Senate